Are Harang's Fastballs and Sliders too obvious?

Share All sharing options for: Are Harang's Fastballs and Sliders too obvious?

I come today not to defend or destroy Aaron Harang. I am simply looking to evaluate him and see if we can gain any insight into his struggles. Building off of this fine piece by justin007000, I decided to take a closer look at Harang's two primary pitches, his fastball and his slider. What I wanted to see is whether or not there is something about them that has led to a decline in performance.

First, a little a data from Pitch FX (courtesy of FanGraphs):

The movement is in inches. Negative horizontal movement means it moves in towards right-handers. Positive vertical movement means it drops that much less than you would expect based on gravity and velocity alone. It appears Harang has more movement on his fastball than he used to, but less on his slider. I honestly don't know what that means in terms of performance. One guess though is that more movement might mean less control of the fastball. This could be why it seems like he is leaving more pitches over the fat part of the plate. I'm just guessing though. Unfortunately, we don't know the difference between where he intended to throw a pitch and where it ended up.

I only put this data in here to show that there has been some change in the two pitches. I'm not experienced enough with pitch fx data to tell you how much that change makes a difference though. Perhaps someone else has some insight.

After the jump, I have another point that I think I can see some significance in, so keep reading to find that out!

Something that I noticed while looking at the pitch fx data is that there is quite a bit of separation between the release point for Harang's fastball and his slider. I wondered if that had always been the case. Here is what I found out, via a slightly confusing graph: 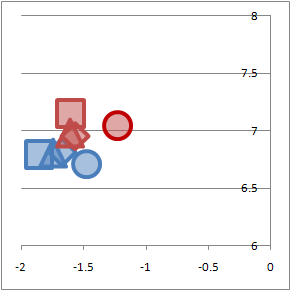 What this graph shows is the average release points for Harang's fastballs (blue) and sliders (red). The different shapes signify different years: triangle=2007, diamond=2008, square=2009, circle=2010. It's hard to see the diamonds and triangles because they are right on top of each other. And that is what stuck out for me. In 2007 and 2008, the release point for Harang's fastball and slider were about 2 inches apart. The last two seasons they have been 5 inches apart on average. For somebody who is only a 2-pitch pitcher (more or less), this might be enough of a tell for the hitter that gives them that split-second advantage on the pitch.

I don't expect that this is something that many hitters can articulate, but I imagine a 5 inch difference in location is perceptible somehow. Maybe it shows as a slightly different angle of the forearm or a raised shoulder. All just hypotheses on my part, but I would guess that most major league hitters are able to pick up on the differences after some time, even if they can't label exactly what it is.

This difference might also explain the change in movement on his pitches, but I'll leave that sort of determination to the experts. What I do believe that it shows is that there has been some sort of change in Harang's delivery/motion/etc. Whether this is injury related or not, I can't tell. I did split up 2008 just to see if there was a difference during the year, but it was fairly consistent. It could just be that Harang's consistent, repeatable motion that was his trademark of 2006 and 2007 is gone. Maybe he can get it back, but I doubt it. I think the best we have to hope for right now is that he can get back to being average.