Farmer's Only: Chapman walks into his first win

Share All sharing options for: Farmer's Only: Chapman walks into his first win 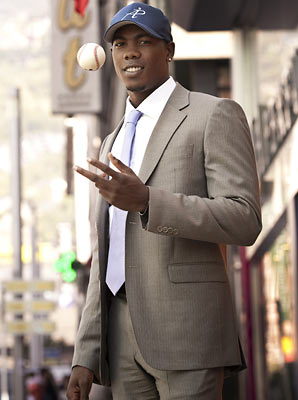 Louisville beat Indianapolis 7-1 behind a strong(ish) start from Aroldis Chapman.  Chappy threw 5.1 innings, allowing only 3 hits and striking out 8.  Why the concern?  He also walked 5, and now has issued 10 walks in 15 innings.  (he also has 18 strikeouts).  The numbers are good, but he really needs to get his stuff under control if he's going to have success at the next level.  This game also featured a well-balanced offensive attack, with 10 different players reaching via a hit or walk.  (Including Chapman, who got his first professional hit!)  Juan Francisco hit his first homer of the season, and also added a double.  Up Next: Indianapolis at 7:15.  Justin Lehr will get the start.

Carolina lost both games of a doubleheader, the first 7-3 and the second 8-1.  Game 1 saw Carolina tie it in the bottom of the 6th (of a seven inning game) only for Jordan Smith to give up 4 runs in the top of the 7th.  Yonder Alonso had two of the Mudcats' five hits in the game, and also drew a walk.  (He also had a missed catch error at 1B.  Keep him in LF!)  In game 2 the bullpen let the team down again.  After Daryl Thompson allowed 2 runs in 5 IP (with 4 Ks), Sean Watson promptly destroyed all hope of a victory by allowing 5 runs in a third of an inning.  Offensively, the 'Cats only managed 3 hits, although one was the first homer on the year by SS Kris Negron.  (We got him for Alex Gonzalez, win for us!)  Up Next: Tennessee at 7:15.  Alexander Smit will take the hill for the Mudcats.

Lynchburg fell to the Salem Red Sox 5-2.  Travis Webb had a solid start, allowing 2 runs in 6 IP on 5 hits and 2 walks, while striking out 6.  Once again, though, the bullpen blew it as Jeremy Horst gave up 3 runs in 2 innings to take the loss.  Devin Mesoraco was 2-4 with a double and Josh Fellhauer hit a double and threw out a runner at home from center field.  Up Next: The Hillcats start a series with Potomac at 7:03.  Mark "Pedro" Serrano will get his second start of the season.

Dayton lost to West Michigan 8-3.  Jacob Johnson took the loss, allowing 5 runs in 4.1 IP, but the bullpen also allowed three runs.  Andrew Means was 4-5 and stole his 6th base of the season.  Henry Rodriguez was 1-3 and drew his first walk of the season.  H-Rod has only one walk and 2 strikeouts in 65 PAs this season.  That's a lot of balls in play.  Up Next: The Dragons start a series in Lansing at 7:05.  Josh Ravin gets the start.