We've talked at length about how Jay Bruce was an unlucky S.O.B. last season, posting a BABIP of .221, well below expectations. Well, he's doing it again this year. Small sample size and all that, but Bruce's BABIP this season is a paltry .182.

Last year, we fretted about Bruce's dip in line drives, but that hasn't been the case so far in 2010. His line drive rate is around 20%, depending on your source, which is pretty good and much better than the 13% we saw from him in 2009.

I also worried last July that Bruce maybe had become a little too pull-happy. I suspected that Bruce tried to pull outside pitches and wound up hitting them on the ground to the right side. The corresponding hit charts supported my claim, which is why I made it. I'm still a little concerned about that, but honestly, it looks like Bruce has at least worked on trying to go the other way with those outside pitches. Check out the new and improved hit charts below (click links to see different view - NOTE: Outside pitches mean from middle of the plate out, inside pitches include middle-in): 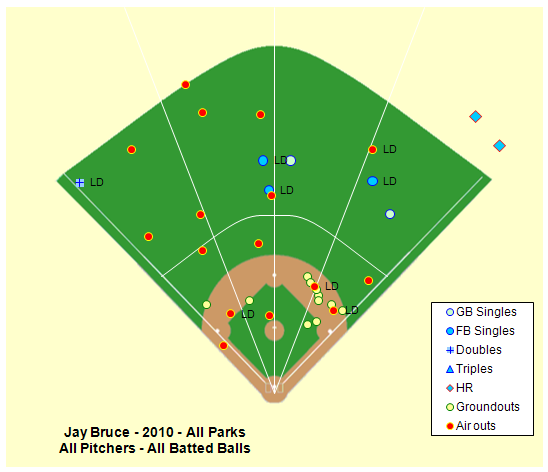 As you can see, Bruce already has a ground ball to third base on an outside pitch, something he hadn't done through July last season. Baby steps. We're still too early to tell if he really has adjusted his approach, but it's something to keep an eye on.

As for his BABIP? Well, I suspect it's still in the fluky stage. Bruce has hit some unfortunate line drives right at people a few too many times. Hopefully they will even out. They have to eventually, right?