Strikeouts are bad...for THIS team's offense

Share All sharing options for: Strikeouts are bad...for THIS team's offense

I'm going to write something that will likely shock people who have been reading this blog for several years.

Strikeouts are killing this team.

However, there is a time when strikeouts become dastardly. A high strikeout team must, repeat must, balance their strikeouts with walks. Why? Because otherwise they are not getting anybody on base. If you aren't walking and you aren't putting the ball into play, well, you likely aren't scoring many runs. In fact, in the last 10 years, that's pretty much been the rule: 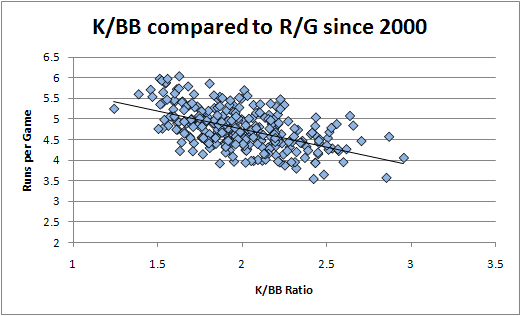 For those that are wondering, the Reds current K/BB ratio on offense is 2.83, which puts them right around 4 R/G mark on the trendline.

That being said, I have little expectation that, outside of maybe one or two guys, the Reds are going to suddenly start taking a bunch of walks. Since patience isn't one of this team's virtues, contact needs to be. Again, if they aren't putting the ball in play, they won't be getting on base. That's just the way it is.

While I had no problem with the Adam Dunn Reds leading the league in strikeouts because those guys could get on base and hit for power, Scott Rolen's Reds™ need to make much more contact if they want to start scoring any runs. (Or take more walks, but we all know that won't happen.)