What comes after 10 innings? 11 innings! Reds need extras to beat the Marlins again, 10-8.

Share All sharing options for: What comes after 10 innings? 11 innings! Reds need extras to beat the Marlins again, 10-8.

Micah Owings.  This is a bit misleading, since it was very much a team effort to win this game, and several players came through in big ways.  I'm giving it to Micah because there won't be too many times when a long reliever is named star of the game, but Owings pitched two scoreless innings and only allowed one harmless baserunner.  He struck out three and earned his second win of the season.  Honorable mentions go to Joey Votto, Jonny Gomes, Ryan Hanigan, and Francisco Cordero. 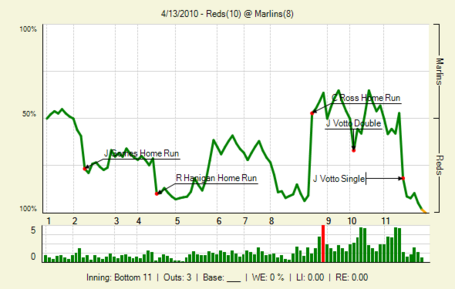