Your move, Strasburg. Reds beat the Cubs in Leake's debut, 3-1.

Share All sharing options for: Your move, Strasburg. Reds beat the Cubs in Leake's debut, 3-1.

Mike Leake.  What did Leake show us today?  Guts.  His debut was very good, but not perfect.  He went 6.2 innings and only allowed four hits and a run.  He struck out five, but also walked seven.  He got in trouble, but he seemed to always be able to work his way out.  Honorable mention goes to Scott Rolen, who went 2-2 with two walks and a run scored. 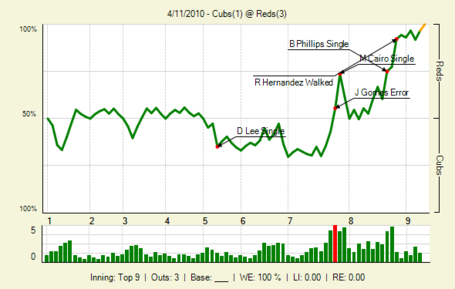