Harang started, so we should have known this would happen.

Share All sharing options for: Harang started, so we should have known this would happen.

Right, so we all know that the Reds can never be winning when Harang leaves the game.  Unfortunately, even though it was tied when he hit the showers in the seventh inning, Arthur Rhodes gave up a home run to pinch hitter Jeff Baker in the eighth.  Votto singled in the bottom of the eighth, but nobody else could manage to do anything.

Then Carlos Marmol struck out the side--Juan Francisco, Chris Dickerson, and Laynce Nix--in the ninth.  So much for exploiting those lefty-righty matchups there.

End result: the Reds rejoin the Cubs below .500.

Brandon Phillips.  Sure, he wasn't great, but he did hit a two run HR with two outs in the bottom of the third to put the Reds up 3-0.  Of course, it didn't last, and BP did nothing else offensively.  But!  He did luck into a bobble that broke up a GIBP. 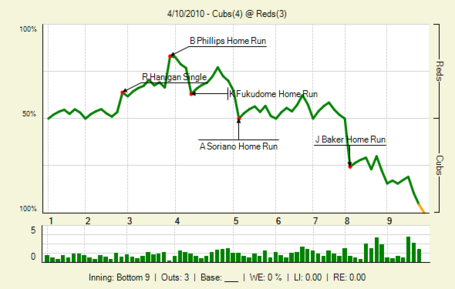