My compyter gas a virus so I had to do this on the downlow in various public libraries. Hope all is well in the RR world.

The Marlins are annoying. My prediction was almost 10 games too pessimistic because they keep on getting career years from weird places. Chris Coghlan was not on my radar. Josh Johnson was not supposed to channel Aaron Harang. Hanley Ramirez was not supposed to learn how to field his position. This was all really weird for me, but still not all that unexpected. They do, lo and behold, have a good thing going on. The Marlins are like my new favorite Miamians, Redfoo and Sky Blu: seemingly a one-hit wonder, they keep on putting out likable stuff even as they embrace their blip-on-the-radar status. Getting Land Shark Stadium renamed is as good for the brand as getting into a slapfeud with Mitt Romney. So let's go to Miami, trick! 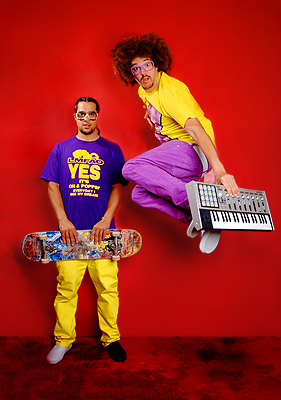 I did a preview last year that's good to read for background or if you're a Central Asian History Nerd. Tony Perez was their manager once. Those teal jerseys were incredibly hot. I heart Quilvio Veras. Fish Stripes is your place for Marlins blogging, if you're curious.

With that out of the way, you should know they went 87-75 last year, but with an 82-80 Pythag. They were in 2nd to the Phils in the East, but finished only a game ahead of Atlanta. They've also never won their division, despite winning the World Series in 1997 and 2003. Their manager is Fredi Gonzalez, who, with polarized shades and greying goatee, looks like the sort of guy who always has a man-can of Bud Heavy in his hand and dip in his pocket. 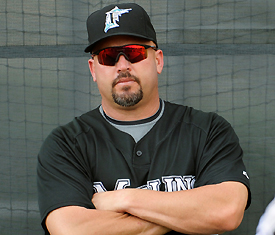 Marlins have always had good starters on the right side of 30. I'm convinced they just have tremendous scouting...even the ones who don't pan out still pan out a whole lot better than most. And there's always someone to take the mound when the inevitable injuries start happening - I'm more impressed by their #4s and #5s than their #2s and #3s. So lets look at their projecteds, as stated by Sporting News, and our slashlines are (W-L,ERA,IP) because I'm not a statsy guy. Go to fangraphs to really get greedy about that sort of stuff.

1) Josh Johnson (15-5, 3.23, 209.0): I didn't think he had this in him after elbow surgery, and I'm still a bit skeptical re: prolonged success. But you take this sort of stuff when you can get it. Harang-esque is my best praise when it comes to pitchers, and I certainly think that Johnson applies. Tall right-hander who doesn't give up many hits. I could see him dropping into the 3.75 range of ERAs, but if he can give, say, 20 more innings as the year goes on, he'd still be valuable. Definitely a mean anchor. Definitely not this guy.

3) Anibal Sanchez (4-8, 3.37, 86.0): Sporting News has the pithy "Shoulder Always a Concern" following his name. Well, yeah. He hasn't thrown 100 big league innings since his rookie year, but he's still just 26. He probably should just fall apart, as he gives up 8 hits and 4.5 walks per 9IP throughout his career...I have a tough time believing the Fish expect 150 IP out of this guy, but hey.

Leo Nunez did a nice job last year, but the 1.7 HR/9 and 3.5 BB/9 is basically what you don't want to have in a closer. I like NRIs Mike MacDougal and Clay Hensley, and one mustn't forget the Honkballers Vanden Hurk and Badenhop. Although he shows no signs of being closer-material, I am rooting so so hard for Chris Leroux just so that he can make In For the Kill his entrance music and the Miami gay scene in attendance goes wild.

If that won't get people coming to games, I don't know what will.

The 1-2 of Johnson and Nolasco is real solid, and everyone else can either improve or flame out spectacularly. They remind me of the '06-'07 Reds in this regard. Two guys who are predictable, and then just a lot of...stuff. Some of those guys may turn out to be Volquez or Cueto, but most won't. But I have more faith in the Marlins' talent development than I do the Reds. The bullpen should be seen and not heard, which seems to be kind of the point with a good bullpen.

Uggla-Ramirez-Coghlan is impressive. I can't believe Cantu and Cody Ross have stuck around this team in effective roles. Everyone else is a decent role player, and Gaby Sanchez may just break out and become nasty. I really like this team's bats, if not their defense. Splits are (Avg/OBP/SLG/PAs)

1) LF - Chris Coghlan (.321/.390/.460/565): O Hai. He can always take a walk and hit doubles in his minor league history. But I don't think anyone saw a .390 OBP coming in his first season. He may drop to the .370s or something, but that's still pretty fantastic. His floor is Dickerson minus Defense, and his ceiling is Adam Dunn hitting singles instead of striking out. I'd bet on the under, but he still frightens me.

2) CF - Cameron Maybin (.250/.306/.383/199): Still wants to be Ken Griffey Jr. and still faster than cheshirecat. Otherwise, he came on strong after his demotion, and many think "something has clicked." While taken in Bruce's year, I think he profiles well versus Stubbs. Both are absolute flycatchers with serious power potential. Maybin is still 23, though, and while I'm not sure if this is his year, I like him in 2011.

3) SS - Hanley Ramirez (.342/.410/.543/652): Still only 26. Except apparently his defense has turned around. My sources say that he's upset in Miami and would feel more comfortable in Cincinnati, where he can be with a manager that speaks Spanish. He may be out of Miami before Spring Training closes.

I've already mentioned Wes Helms and Ronny Paulino. Emilio "The Pope" Bonifacio and Brett "Not Jamey" Carroll are also on the 40-man. Mike Lamb is an NRI and is someone a team as weak on the corners as the Marlins could use. Danny Richar showed up in this camp, I could see him getting some PAs as well. Mike Stanton has only recently beat pitcher-Mike Stanton in a google search. He's not on the 40-man yet, but his minor league slashline is.267/.354/.539. If he gets called up in a game against the Reds, and Mike Lincoln or Micah Owings is pitching, we may see the 2nd interstate home run in history. Beware.

Take out Hanley and this is a pretty average group of guys. But you can't do that. You have to play against Hanley as well. If Coghlan can't keep up his OBP or Uggla falls off, then this team is in trouble. But I wouldn't bet against Hanley's talismanic properties (I would bet on a trade to the Reds though).

This is a good team. They have decent depth everywhere but in the corner infield, they have some interesting prospects coming up, and they have a lot of youth and guys who have been playing with each other for a while. I see another 86-88 wins coming out of this group, and they could be in the mix depending on how everything else shakes out. They have a solid 1-2 punch if they get to the playoffs, as well, and plenty of trading chips to improve their bullpen. I won't root for this team unless they go back to the teal uniforms, but they're a fun, fundamentally solid team.

Which Delicious Sandwich Does This Team Remind Me Of? 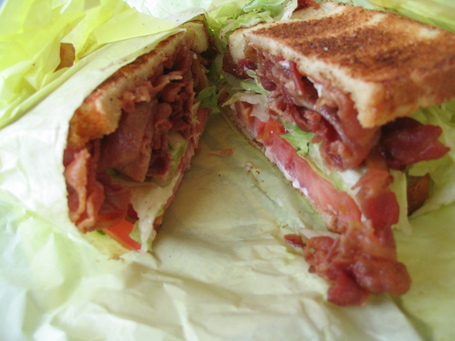 If you have some crusty white bread, thick-cut smoked bacon, ripe spicy tomatoes, crunchy lettuce, and homemade mayonnaise, you have a damned good sandwich. You take away any one of those ingredients, though, and you're having a couple condiments on bread. You compromise any of the ingredients, and the whole sandy goes to pot.

Coghlan, Ramirez, Uggla, Johnson, Nolasco. You need all of them to have great years and live up to their abilities in order to compete. Otherwise you're having some soggy ingredients and an unabated appetite. There isn't a lot to this team, but what is there needs to be fantastic in order to exist at all. And if not, well, they're screwed. When you order a BLT, you're hoping that everything will be just right. But if you're at a good restaurant you trust as much as I trust the Marlins' front office, than you're probably going to be fine.