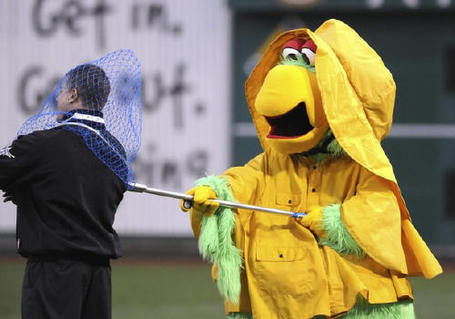 The 2010 Pittsburgh Pirates are not a team searching for an identity; they are on a mission to find a better one. Finishing well below .500 in 2009 (62-99), the Buccos compiled their 17th straight losing season. A record held by them not only in MLB, but in the NBA, NFL, and the NHL as well. The last time the Pirates had a winning season was in 1992. It was Barry Bonds' last season as a Pirate, they finished 96-66, and it was the third year in a row they lost in the NLCS (losing to the Cincinnati Reds in '90 and the Atlanta Braves in '91-'92). The closest resemblance of success the Pirates have seen in the past 17 seasons was in 1997. They were in playoff contention until the final week of the regular season. Despite a losing record (79-83) and a mere $9 million payroll, the Buccos finished the '97 season second place (behind the Houston Astros) in the NL Central.

2010 is going to be a year of development and rebuilding for the Pittsburgh Pirates. After finishing last season 14th in the NL in ERA and last in runs scored, manager John Russell's third season with the Buccos will be graded on how well he matures the infantile talent he's going to be handed throughout the season. The defense for the Pirates was there last year. With the offense struggling mightily and the pitching staff performing way below average, the Pirates did have at least one thing going for them. They ranked first in the majors last year with a phenomenal .988 fielding percentage. If lethargic Pirate fans can make it through another dismal season or so, they might be rewarded with success sometime soon due to a blooming farm system. After spending more cash in the draft than any other team over the past two years expect this season's Pirates ball-club to be an experiment not only in youth, but in small-market consolidation. The Buccos will receive yet another elite pick in the '10 draft. Team president Frank Coonley is well aware of the League's rules surrounding players with 0-6 years of MLB experience and is well-known for practicing them. No one in the organization is expecting post-season play or even a winning record; instead they have set reasonable sights aiming to climb out of the bottom of the NL Central after spending four of the past five seasons ultimately in the basement. Frank Coonley recently told MLB.com, "We believe that this team can be the team that turns this franchise around."

The team that Mr. Coonley is referring to consists of many new faces. Last year's entire Opening Day infield was shipped away during the '09 season. In fact, five of the eight position players on the field for the Pirates on Opening Day '09 are with other teams this year and one (Brandon Moss) is projected to start the year as a backup. C Ryan Doumit and 3B Andy LaRoche are projected to be the only two starters remaining from the '09 roster.

All of this being said, the Pirate's youngsters have plenty of weight to carry going into the 2010 season. With an overhaul of prospects the organization seems to be on the right track. CF Andrew McCutchen will be required to lead the offense entering his second season in the majors. During his rookie season, McCutchen led the squad in runs (74) and stolen bases (22). The 11th overall pick in '05 also drove in 54 runs and hit 12 home runs leading off for the Pirates in '10. McCutchen quickly established himself last year as the face of the Buccos, reigning centerfielder, and the five-tool player everyone expected him to be. He did moderate damage against the Reds last season in 13 games going 12-42 (.286) with 2 home runs, but ran all over Reds' catchers stealing five bases in as many attempts. Hopefully, for the Pirates sake, he will reach his potential in Pittsburgh and not somewhere else.

Lastings Milledge is another player the Pirates will need to produce offensively during 2010 (.313, 3HR against Reds' pitching last year). He is now with his third organization in four years after being acquired in a trade with the Nationals involving Nyjer Morgan last June. (When former Red Adam Dunn became a National in '09, Milledge willingly surrendered his number "44" to the incoming slugger.) Milledge played 58 games for the Pirates after the trade last year hitting .291, but will need to work on his plate discipline to become effective against major league pitching.

With so much upcoming talent in 2010, much of the Pirate's lineup will need to sleep with one eye open. Players like 1B Jeff Clement, RF Garrett Jones, and 3B Andy LaRoche haven't yet established themselves in the big leagues and will be targeted by many players currently with Pirate affiliates. Pedro Alvarez (2nd overall pick in '08) lit up the minors last year between AA-AAA ball hitting 27 HR and will be awaiting a call from the big league club if and when a corner infield position becomes available. Both Clement and Jones will need strong starts if they want to secure their positions. Catcher Ryan Doumit will also need a strong start and cooperating health to stay behind the plate for the Pirates this season. Backup catcher Jason Jaramillo held his own last season when Doumit was injured and (4th pick overall in '09) Tony Sanchez is on the fast track to the big leagues after he hit .309 with three different single A teams last year. Infielders Akinori Iwamura, Bobby Crosby, and Ronny Cedeno won't feel as much pressure from downstairs in '10, but will need to have productive seasons if they want to help their team get over the losing hump. Certain Cincinnati Reds heavily enjoyed facing Pittsburgh last season (Balentien .350, 2HR : Dickerson .417 : Votto .385, 11RBI : Stubbs .314, 3HR : Phillips .379 4HR) In 605 total at-bats, the Reds hit a combined .294 facing Pittsburgh last year including 13HR and 41 doubles. With the Pirates hitting a mere .238 against Cincinnati last season, they only drove in 61 runs compared to the Reds' 90 when facing one another.

The Pirates pitching staff could be their demise in 2010. Either Paul Maholm or Zach Duke will more than likely start the season on the mound for the Pirates. Paul Maholm (Reds hit .267, 5R, 1HR in two games against Maholm in '10) has never won more than ten games during his career with the Pirates. In fact, he has only won ten games once and in the year he did that ('07) he managed to lose fifteen. Since entering the league in 2005, Maholm has a career 38-44 record and a 4.33 ERA. He has started 29+ games for the Pirates during the last four years and his work-horse ethic would place him at the end of a quality rotation, but for the Pirates, Maholm's a potential ace. The other latent ace for the Buccos is Zach Duke (Reds hit .311, 18H, 3HR in five games against Duke last year). He was a member of the NL All-Star team last year and ended his '09 season going 11-16 leading the NL in losses. With all five of his MLB seasons being in Pittsburgh, Duke has managed to compile an unflattering 37-55 record and a 4.30 ERA. Both potential Opening Day lefties share qualities and faults. Maholm and Duke should eat innings and pitch consistently mimicking their previous seasons. The other holes in the rotation will be filled with guys like Ross Ohlendorf (3.92 ERA last year was the team's best), Charlie Morton, Daniel McCutchen, Brad Lincoln, Tim Alderson, Donald Veal, Jeff Karstens, Jimmy Barthmaier, and Kevin Hart. All of these young arms will probably see time in Pittsburgh sometime this season. The Pirate's 2010 rotation has obvious problems, but if they can culminate to produce average pitching, with the offense supplying the support, and the bullpen holding games a .500 season is manageable.

After a rough year in '09, the Pirates decided not to offer arbitration to Matt Capps and now he's the expected closer in Washington. The Buccos signed veteran Octavio Dotel as a gap-stop replacement. Dotel last closed full-time in '04 saving 36 games for Oakland and Houston. If Dotel's tank is empty this year expect setup man Joel Hanrahan to step in. Mid-relievers Evan Meek, Steven Jackson, Javier Lopez, Jack Taschner and D.J. Carrasco are all possibilities to make the team, but none have overpowering stuff other than average sliders and 90mph fastballs. The Pirates also signed 38 year-old Brendan Donnelly who could end up in the pen this year. If the Pirates are lucky though, their starters will eat up as many innings as possible, allowing their non-dominant bullpen to do minimal work. That might be the most effective approach to accomplish mediocraty.

The Reds and Pirates will face-off sixteen times during the regular season in 2010 (9 at PNC - 7 at GABP). They will play ten times through April and May, then won't see each other until August 2nd to play three games in Pittsburgh. The two teams will finalize their '10 rivalry with a three game series in Cincinnati starting September 10th which is German Heritage Night at GABP.

After all of the scrutinizing, the Pirates seem to be heading in the right direction. They are a few pitchers short (if their offense decides to flourish) away from ending their embarrassing streak of losing. If they can correctly develop and detain all of the young talent they have recently obtained, the Pirates could become one of the youngest and talented teams in the NL Central in the approximate future. A winning season should be nearby.