Earlier this week I published a little study at Hardball Times looking at run environments across the minor leagues.  They vary considerably, with some leagues scoring in excess of one run per game PER TEAM more than others.

This is particularly interesting for the Reds, who are moving two of their minor league affiliates to substantially different run environments this year.  Here's a graph showing all current Reds minor league teams (denoted with stars), and the changes from 2009 to 2010: 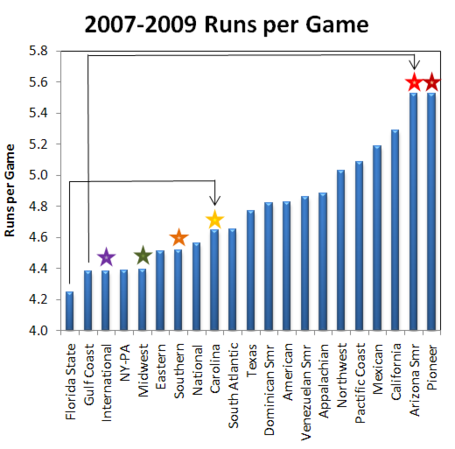 So, whereas in 2009 the Reds had teams in the two lowest run environments in baseball (the Florida State League and the Gulf Coast league), we'll now have players at the same minor league levels playing in the Carolina League and the Arizona Summer League.

How much of a difference does it make?  Here are average ERAs (2007-2009) for pitchers in the Florida State League vs. the Carolina League (both High-A leagues):

So, essentially, you can expect the average pitcher to bump up his ERA by 0.3 runs or so.

What about the bigger change, going from the Gulf Coast League (pitchers' league) to the Arizona Summer League (anti-pitcher's league):

Go easy on judgments of pitchers in rookie ball, right?  Since these leagues are more or less of equal talent levels, this means that taking an average pitcher from the GCL into the ARZ league will cause his ERA to jump up 0.75 runs!

Here are the average ERA's for each step on the path to the big leagues for our pitchers, assuming they play in every team in our system, and ignoring individual park effects:

So the good thing, now, is that we more or less have all three of our top three tiers of the minors clumped right around a 4.05 ERA.  We won't have to worry much about differences league run environments once guys get out of Dayton.  This, to me, is the nicest thing about the Reds moving their high-A team from Sarasota to Lynchburg.  That said, in all cases, our full season leagues are slight pitcher's leagues, so we still need to be a bit cautious in how excited we get about our pitchers.

What about hitters?  For quick and dirty, OPS will do fine.  First, let's compare the teams that are moving:

Might not seem like a huge difference, but we're talking 45-points of OPS for the rookie league team.  That's the difference between a 0.755 OPS and 0.800 OPS player, which is enough to affect how we judge a guy.

Also, as a side note, you might be surprised at how low the OPS was for the Arizona summer league given their run environment.  The explanation is errors: 4.6% of balls in play result in an error in the Arizona Summer league compared to, say, 2.8% in the Carolina league.  The result is lots of hitters that get on on base (and later score) in Rookie ball on plays would be outs in High-A ball.  Those extra guys on base don't improve one's OPS, though, because they are on errors.  As I pointed out in the Hardball Times article, there is essentially a perfect correlation between league level and error rates.

Finally, here's the OPS path for players moving through our system now:

The story here is to be wary of great numbers from Billings or bad numbers from Dayton, but aside from that our hitting environments should look pretty consistent.  Again, the reason that Dayton has a lower OPS than the Louisville (INT) is that many more errors are made in Dayton that aide the runs per game numbers, but not a hitter's OPS line.