A Glimpse at the Reds New Goodyear Complex

Share All sharing options for: A Glimpse at the Reds New Goodyear Complex

Pitchers and catchers report just one week from today. There's not much better news than that when you have a foot of snow outside of your door. This nasty winter weather will be over soon and before you know it, we'll be freezing our bejeezels off during Game 2 against the Cardinals.Thankfully we'll have our Reds snuggie to keep us warm.

Until we get to that point though, we have a full spring training camp to go through at the Reds new facility in Goodyear, Arizona. Having just been out there for Reds Fantasy Camp, let me tell you that it is an absolutely beautiful complex. The former players that were out there were lamenting the fact that it was better than many of the regular season facilities that they played in, not just Spring Training.

I took some pictures around the camp that you can view after the jump. Hopefully it will warm you up and get you ready for Spring!

If you've never been to the Phoenix area, it's very flat except for a couple of mountains that stick up in unexpected places. You literally can see for miles around you, so you can see the Goodyear camp from far away. When you get up close, this is what the Reds offices look like: 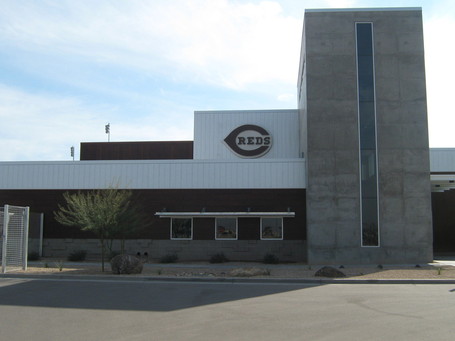 A lot of concrete, dark woods, and artificially rusted surfaces. It's not a gorgeous building, but stylistically, it suits the landscape. When you walk into the lobby, this is the first thing you see: 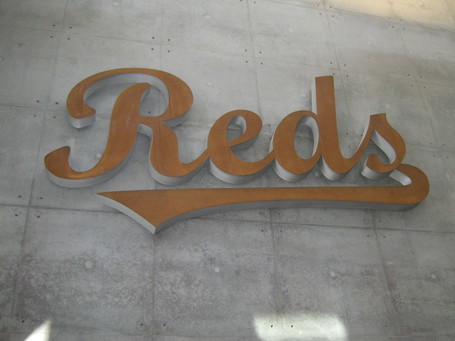 I believe that script used to appear on the Reds uniforms back in the 1950s or 1960s, but it hasn't been used since. We were told that it will likely reappear on the uniforms some time in the next year or two.

On the back of the building is a beautiful patio where you can see on to all of the practice fields. All of the big execs (Castellini, Jocketty, Bob Miller, Dick Williams) have offices that open right out to the patio. We had a nice barbecue up there after the championship game and I even used Walt Jocketty's private bathroom. Sorry, no pictures were taken of that. 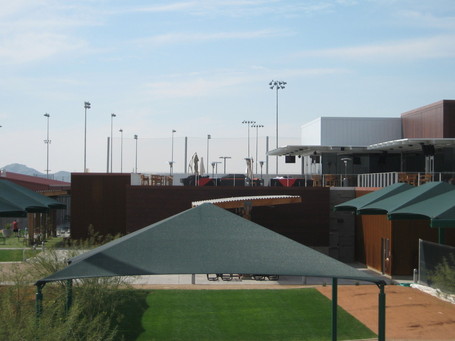 When the players come in the back entrance, the first thing they'll see when they walk through the gate is this: 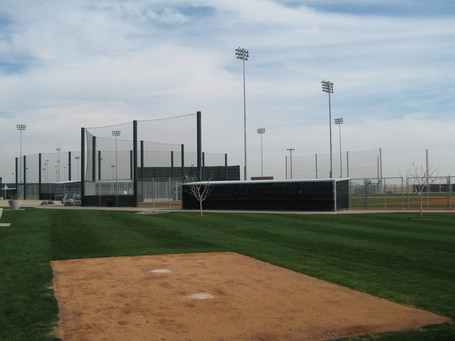 It'd be a damn shame to have to go work here every day for a month. The two fields you see in this picture are the main practice fields for the Reds. This is also where their extended spring training and instructional league teams will play during the summer. We played most of our games in an area they called the Clover Leaf, which was four fields all centered around a common area. These fields are actually used by the city when the Reds aren't using them and high school and little league teams get to play on them. They were better than any field I've ever been on... 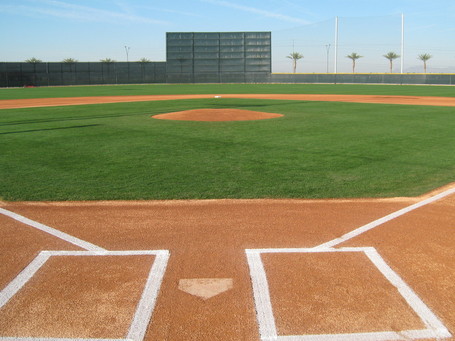 One interesting aspect scenery-wise is the planes. There is an airport right next to the park, so throughout the day there are lots of small planes flying overhead. There is also a storage landing for jumbo jets, so there is a parking lot full of commercial airliners that aren't currently in use that you can see from just about anywhere in the camp: 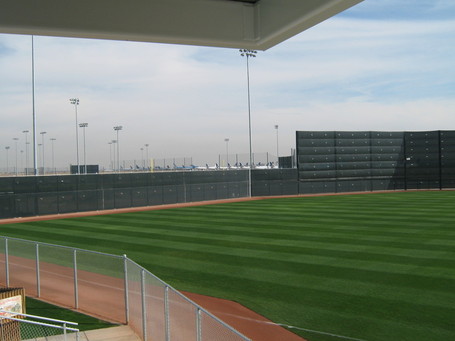 If you are going to Spring Training this year, you likely won't see most of what I've already shown you. That's because the actual training facility is about a half-mile away from Goodyear Ballpark, where the games will be played. While the Reds and Indians each have their own separate training complexes, they will be sharing the ballpark. 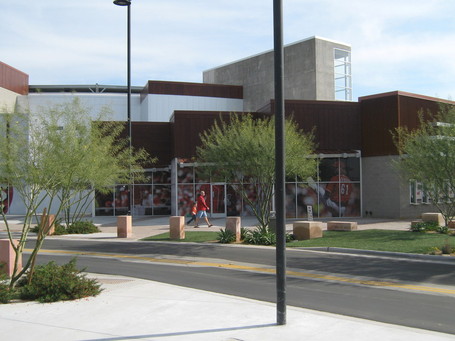 If you click that picture to see a larger version, you'll see images of Bronson Arroyo, Brandon Phillips, and Joey Votto on the windows. On the Indians side of the building they had images of Grady Sizemore, Cliff Lee, and Victor Martinez. D'oh!

It's a good looking park on the inside. They didn't have anything open besides the field, so I'm not sure what all there is available, though we did notice a wiffle ball field for the kiddies. There just something about palm trees in the background of the baseball field that feels like Spring: 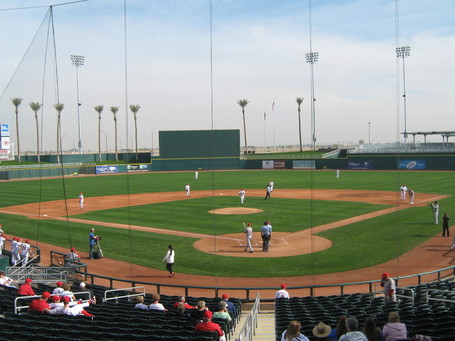 As you can see, the Reds have done pretty well for themselves. I don't have any good pictures of it, but the Major League clubhouse at the camp is outstanding. There are 4 huge TVs in the center of the room that makes it look like an arena. Everything is so fresh and clean throughout that you feel a little awkward touching anything. They also had a huge weight room that we weren't allowed to use (not that it mattered for me), two hot tubs and two cold tubs, and very nice cafeteria. It was like being in college all over again.

If you get a chance to go out and see the complex yourself, I highly recommend it. It's top notch all the way.