8 Days of Brendanukkah: Greasy Taught Me

Share All sharing options for: 8 Days of Brendanukkah: Greasy Taught Me 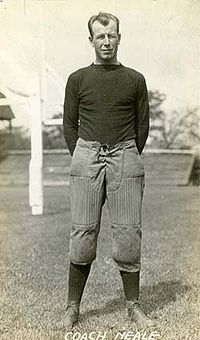 As every Reds fan from the 90s remembers, Deion Sanders popped up in the outfield from time to time. Neon Deion garnered a lot of attention as a two sport athlete and stole some bases for the Reds. He even showed up on the cover of Sports Illustrated. But he wasn't the first Reds player to also be a professional football player. He wasn't even the best.

Alfred Earle "Greasy" Neale was born in 1891 in Parkersburg, WV. He broke into the majors in 1916, and played nearly his entire career with the Reds, manning right field next to Edd Roush who also joined the Reds in 1916.
The speed of Neale and the arm of Roush must have made for an intimidating outfield defense. In fact, Greasy led the league in fielding percentage in 1918. Beginning in 1917, Greasy also played football in the Ohio League, the precursor to the NFL. That year, he played for Jim Thorpe (another multi-sport athlete) and the Canton Bulldogs. In 1918, he played for and coached the Dayton Triangles. His teams won the Ohio League Championship both seasons.

Neale had left the Reds before the season ended to play football, but in 1919, his baseball team was winning like his football teams had done. The Reds were led by the offensive force of Edd Roush and Heinie Groh, and by an incredibly strong pitching staff. Neale's contributions involved slap hitting his way on base and then running like crazy. If he couldn't do that, then he would move the other runners ahead of him. He had 31 sacrifice hits that season. Greasy was never a strong hitter, and that season was actually one of his worst (.242/.316/.316), but something funny happened in the World Series - other than players from Chicago throwing games. Groh and Roush slumped badly in the World Series, but Neale took off like gangbusters. He hit .357 and OPSd .864 to be the top hitter for the Reds in the Series, and did it all from the 7th spot in the order. His baserunning failed him though, as he stole only one base and was caught stealing four times.

After the season was over (Greasy had played the whole season for the Reds that year), Neale played for the Massillon Tigers. It was his last year as a football player, and the 1920 season would be his last full year as a baseball player. His offense was just about gone, but Neale still had one incredibly valuable role to play for the Reds. Before the 1921 season, he was traded to the Phillies for Eppa Rixey, who would go on to pitch more innings and win more games for the Reds than anyone in history. The kicker was that after only 22 games with the Phillies, Neale was placed on waivers and reclaimed by the Reds. Neale's skills were pretty much irretrievably gone, but ironically he had his highest OBP ever in his time with the Phillies. Greasy would see Philadelphia again.

Following baseball, Greasy Neale became a college football coach at Washington & Jefferson College (which he took to the 1922 Rose Bowl), Virginia, and West Virginia. In 1941, he became coach of the Philadelphia Eagles and eventually took them to championship glory. In 1948 and 1949, the Eagles won the NFL Championship and became the only team to win titles with back to back shutouts. The Eagles have only won other championship. Neale developed the Eagle Defense, which was a precursor to the popular 4-3 defense used today. Neale was inducted into the College Football Hall of Fame in 1967, and the Pro Football Hall of Fame in 1969. He was the first man to make it into both as a coach.