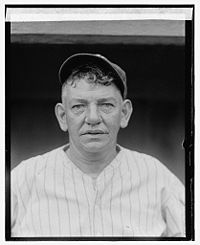 Eagle-eyed readers will notice that there wasn't an entry for fifth night of Brendanukkah yesterday. Well, it's here now, so please to enjoy. Tonight's tale is not about a Reds player, but it is about a ballplayer from Cincinnati. Nick Altrock was his name, and he was born in America's centennial year of 1876. I admit to being initially attracted to him because of his name, but there's some interesting stories associated with old Mr. Altrock.

Altrock began his career in nearby Louisville, which at the time was home to Louisville Colonels of the National League. He, like the protagonist of so many later alt-rock songs, was 21 and unimpressive. He pitched in eleven games for the Colonels, making seven starts. His ERA was 4.50, but his strikeout to walk ratio was a pretty dismal 0.62. The record is sketchy, but Altrock didn't surface again until four years later in 1902 with the Boston Americans. Meanwhile, the Colonels folded after the 1899 season and their owner bought a controlling stake in the Pittsburgh Pirates. He took several of his players, including Honus Wagner, with him from Louisville. Other notable Louisville players included two Cincinnati Reds Hall of Famers, Dummy Hoy and Tony Mullane, as well as -ManBearPig favorite, Capt. Jack Glasscock.

Anyway, Altrock pitched four awful games for Boston before he was purchased by the Chicago White Sox in 1903. In Chicago, he blossomed. In his age 27-29 seasons, he nearly posted three back-to-back-to-back 20 win seasons, getting only 19 wins in 1904. He placed in the top 10 in the league in wins each of those seasons. He was never a strikeout pitcher, but he got his walks under control and from 1903-1908 with the White Sox, never posted a WHIP higher than 1.128. In fact, he is still the White Sox leader in BB/9 with a rate of 1.49.

In an event that could have only happened in 1906, the White Sox met the Cubs in the World Series. Altrock started Game 1, beating Mordecai "Three Finger" Brown 2-1. They locked up in another pitcher's duel in Game 4, and this time Brown came out on top in a 1-0 victory. Altrock fell victim to the Cubs' poetic infield when Frank Chance led off the 7th inning with a single. Two sacrifice bunts (including one by Joe Tinker) put him on third, and Johnny Evers's single provided the only run of the game. The White Sox would go on to win the Series in six games. It was the first of three championships in their history. Altrock had a Series-low 1.00 ERA. First Night of Brendanukkah subject Orval Overall also pitched in this Series, for the Cubs. On a personal note, while researching this I was reminded that the White Sox won the World Series in 1917 as well. I knew my grandfather was a big White Sox fan, but wasn't sure exactly why. Well, he was growing up outside of Chicago and the Sox won when he was nine years old. I was nine years old when the Reds won the World Series in 1990. I understand my grandfather a little bit better now.

Altrock suffered an arm injury after the 1906 season and was never quite the same pitcher. He did hang on with the White Sox until 1909 when he was traded to the Washington Senators. He actually played in parts of eleven seasons for the Senators, but only in 29 total games. In 1912, he became a coach for the Senators, but would still make cameo appearances to pitch a few games, or pinch hit. In fact, his playing career ended in 1933. He pinch hit in a one game playoff between the Senators and the Philadelphia Athletics. Altrock was the pinch hitter for John Kerr (who had replaced Hall of Famer Joe Cronin), and he was retired - in this case, literally - by Rube Walberg. Altrock was 57. Predictably, the Senators team using 57 year old pinch hitters (and light-hitting backup catcher and World War II spy, Moe Berg) lost, 3-0.

Altrock's playing career lasted from 1898-1933, a 35 year span. However, he only played in 218 games in that time. But what an opportunistic 218 games! He managed to play on three different World Series winning organizations (1903 Boston Americans, 1906 Chicago White Sox, and 1924 Washington Senators). Due to the sporadic nature of his playing time, he had the distinction of being the oldest player in the league five times, each in non-consecutive years (1919, 1924, 1929, 1931, 1933). After his last appearance as a player in 1933, he continued coaching with the Senators for another twenty years. That meant he had been a coach with the Senators from 1912-1953, forty-two seasons as a coach with the same team. That is still a record to this day. Altrock was apparently a character in the coach's box and ended up forming a performance partnership with Al Schacht, the Clown Prince of Baseball. They performed comedy routines for a dozen years both on the diamond and on the vaudeville stage.

Altrock died in 1965 at the age of 88. He is buried in the Vine Street Hill Cemetery in his hometown of Cincinnati.