Share All sharing options for: Updating the Top 100: Part 5 of 5 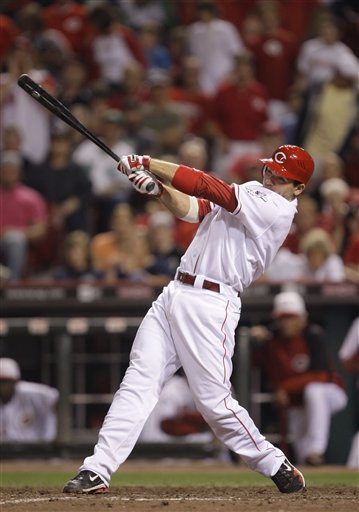 • Votto’s 2010 season marks—per Win Shares—the best individual campaign by a Red since Joe Morgan in 1976. WAR would suggest that six other seasons since that year have equaled or bettered Votto’s contributions.

• The Hank Aaron award has only been around for 12 years, so this isn’t that big a deal, but still: Votto’s the first ever Redleg to win it.

• No other position player in our top 100 list has as sharp a disparity between value added by the bat vs. by the glove. Adam Dunn is a close second.

• As player comps go, I have a feeling Todd Helton may represent the best fit. Ignoring the raw data skewed by Coors Field, Helton also broke into the majors in his age-23 season for about a month, then posted the following OPS+ marks in his first three full seasons: 119, 122, 163. Votto’s been better (125, 156, 174), but not to the point where you can’t see a similarity. Helton also won the Hank Aaron Award and made his first All Star team in his age 26 season (but finished 5th in MVP voting). Whether the comp is legit or not, Helton played the next five seasons at OPS+ levels between 144 and 165. I suspect most of us would sign up for that right now, especially if not locked into the kind of decline that Helton has suffered since that elite stretch.

Regardless of where Votto’s 2010 season ranks and how his career progresses, this kind of year is rare and worth appreciating. Votto jumps from #151 on the all-time list to #64, and bumps pitcher Fred Toney out of the top 100. He also rises five spots on the list of best first basemen in team history, to #10.