8 Nights of Brendanukkah: The Story of Orval Overall

Share All sharing options for: 8 Nights of Brendanukkah: The Story of Orval Overall

Happy Hanukkah to you all! It's the one week of the year when anyone feels any sort of kinship with Let's Go Tribe! To celebrate, I will be providing eight days of original content. I have no idea what sort of form this will take, but let's roll with it. On this first night of Brendanukkah, I will share with you the story of my favorite-named Red of them all, Orval Overall. 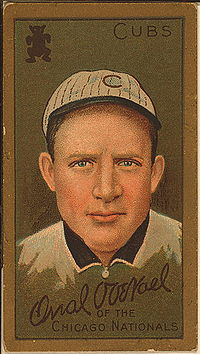 Orval was born in 1881, the same year James Garfield was shot. He was born in Farmersville, CA, a remote inland town that even today has a population of under 9,000. It was an agricultural community, but Orval was something of a rarity. He left Farmersville to attend college at UC Berkeley, possibly because of his excellence at sports. He was captain of their football team and named an All-American. But by 1904, when he was 23, he had made his way north to Washington and was playing professional baseball in the Pacific Coast League for the Tacoma Tigers. He pitched over 510 innings and posted an ERA of 2.78. Naturally, this caught the attention of some of the Major League clubs back east, and he was drafted by the Cincinnati Reds in the Rule 5 Draft.

1905 was Overall's rookie season in the majors. The Reds that year weren't good, though they did finish 79-74. They were fifth in the league. Overall had something of a mixed season. His 18 wins were good for second on the team, behind staff ace Bob Ewing, but he had 23 losses, which still rank as fifth most ever in a season by a Reds pitcher. His WHIP was a respectable 1.37, but it's fairly remarkable when you realize he walked 147 batters, also the fifth most ever in a season by a Red. He led the league in most errors committed by a pitcher, but also placed third in strikeouts. He finished the season with a 115 ERA+, better than any starter on the 2010 Reds.

Overall struggled in his second year, with his ERA jumping up nearly a run and a half. The 1906 Reds were a mess, finishing with a 64-87 record (although they did have a first baseman named Snake Deal). On June 2, they sent Orval Overall and $2,000 to the Cubs in exchange for pitcher Bob Wicker. It was a terrible trade for the Reds. Wicker only went 6-11 down the stretch in what was his final year in baseball, but Overall went on to become a top-notch pitcher in Chicago. He went 86-43 in six seasons with the Cubs, and got his walks under control. He once led the league in strikeouts and twice in K/9. In each of his first four years with the Cubs, he went to the World Series. The pitching staff included Mordecai "Three-Finger" Brown and the infield featured the Tinker-to-Evers-to-Chance double play combination. Overall and the Cubs were twice World Champions in 1907 and that fateful year of 1908.

Following the 1910 season, Overall's arm gave out. He had pitched 1,467.1 innings before he had turned 30, which doesn't include the 510 he threw for Tacoma. Overall was out of baseball for the next three years, and attempted a short, unsuccessful comeback with the Cubs in 1913, the year Woodrow Wilson became president. Wikipedia sums up his career with this delightful sentence:

Overall, he played seven years in the major leagues, compiling a record of 108-71 with a 2.23 lifetime ERA.

He ended up becoming the vice president of a bank in Fresno, and died in 1947 at the age of 66.