A Visitor's Guide To Cincinnati and GABP, Part 4 - The Game Experience

Share All sharing options for: A Visitor's Guide To Cincinnati and GABP, Part 4 - The Game Experience

You've made it here, you found a place to eat, and even had a little fun. Now for the reason you came in the first place - to see a ball game, right? Great American Ballpark is a wonderful venue to watch a game. We hope you'll be as happy to see the fireworks at the end of the game as we are! 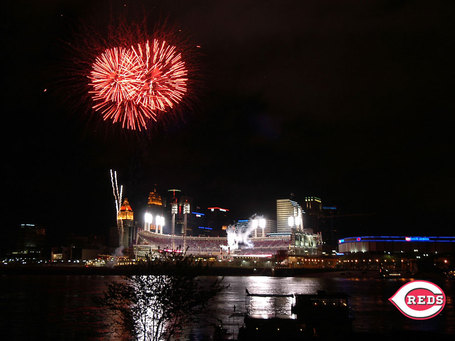 Having opened in 2003, Great American Ballpark is one of the nicest places you'll ever watch a MLB game. Wide concourses, lots of amenities, and great views make the experience a sublime one......of course, I could be biased.

Tickets - Tickets are pretty easy to come by with the exception of Opening Day, you can find the pricing scheme and seating chart right here. The only other dates I could see being a problem are the Indians (June 25-27) the Civil Rights game against the Cardinals (May 15), the Reds HOF Induction/Chris Sabo bobblehead game against the Rockies (July 17), and maybe the Cubs (April 9-11, May 7-9, Aug 27-29) . If you're into giveaways and promotions, check out the schedule here.

Dates of interest include the following:

Run The Bases Day (April 25, May 30, June 27, August 15) - Fans of all ages have the opportunity to run the bases on the field. All dates listed are Sundays.

Giveaways - You can get a Reds snuggie on April 7 (Cardinals), a retro mesh jersey on May 15th (Cardinals, last year's were pretty sweet), a Joey Votto action figure on May 29 (Astros), a Reds skateboard deck on May 30 (Astros), a Scott Rolen bobblehead on June 12th (Royals), Chris Sabo bobblehead on July 17th (Rockies), or the "Fan's Choice bobblehead" on July 31 (Braves)

Location, location, location - Where do you want to sit? If you're going to sit in the upper bowl I suggest somewhere between the plate and the LF foul pole, as it will allow you a great view of the river and the hills of Northern Kentucky. Anywhere in the lower bowl will give you a great view of the field, while sitting in the bleachers in LF or the seats in RF is economical and fun, since you'll be sitting with the common man/woman.

Once you have your tickets, let me give you this piece of advice: make time to visit the Reds Hall of Fame Museum. It's worth it even if you're not a Reds fan, it's very well done. There's even a Rose Garden where Pete's 4,192nd hit fell. Here's some quick info:

I covered parking and getting to the stadium in the first installment of this series for some reason, so let's just assume you made it to the gates safely, ticket in hand.

Once you're in the ballpark - There's plenty to do and see throughout the ballpark, let me give you some highlights.

Before we go any further, let me remind the smokers out there that smoking is prohibited in GABP, and you cannot leave and reenter in order to get your fix. We know, it sucks.

There's a Fan Zone behind the RF concourse with a ton of activities for the little ones, a bunch of games, and the occasional concert. On the 2nd level on the 3B side there's The Machine Room Grille, a great place to have a few adult beverages, grab something substantial to eat, or hide from the occasional rain. For all your Reds gear needs there are two pro shops, one as you exit the Reds HOF Museum and one in the LF corner on the main concourse. There's also a large seating area outside the pro shop in LF with big screens so you can catch up on the other happenings in the sports world that day.

Concession stands are everywhere, obviously. You can get your fill of local favorites like Skyline Chili, Lasrosa's pizza, and Montgomery Inn BBQ at the stadium but as we've covered here in the past it's just not the same. The only local delicacy I WOULD recommend at the stadium would be Christian Morlein beer, brewed right here in the Queen City.

Bathrooms are also plentiful, with the oversized family bathrooms being a Red Reporter favorite.

That's all I can think of at the moment, I'll update this as you guys point out my obvious missteps. As always, if you have any questions, email me or any of my cohorts here and we'll do our very best to help you. Enjoy your stay, and GO REDS!