A Visitor's Guide To Cincinnati and GABP, Part 2 - Dining

Share All sharing options for: A Visitor's Guide To Cincinnati and GABP, Part 2 - Dining

Now that you've made it to Cincinnati and have settled into your temporary living arrangements, let's move onto the next human necessity: FOOD. Luckily, this is my specialty. I eat and drink like few people can. I’m Adam Richman minus 75 pounds, stubble, and a degree from Harvard.

Cincinnati food, come get some! 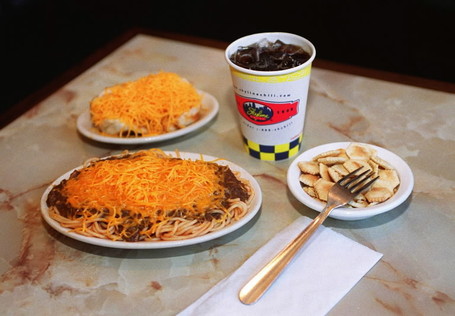 Cincinnati's signature food would have to be its take on chili. Cincinnati-style chili is a lot thinner than regular chili and has a touch of cinnamon and chocolate in it to create a unique flavor. It's served as hot dog sauce in a cheese coney(seen above), over spaghetti(known as a Three, Four, or Five Way, seen above), and even over French Fries and baked potatoes. It is always accompanied by an egregious amount of finely shredded Cheddar cheese and oyster crackers. If you’ve never had it, you have to try it. It tastes a lot better than it sounds, trust me on this.

There are two main chili peddlers in town, Skyline and Gold Star. You'll be able to find one of these no matter where you are. A dark horse candidate would be Camp Washington Chili, one of the originals and still one of the best according to many.

Goetta is a local favorite as well, a breakfast food that resembles sausage but is equal parts meat and pinhead/steel cut oats. It's a leftover from the German heritage that runs deep in the area, and many people are fans. I am not to be included in that group. You can get it at most mom and pop style diners (The Anchor Grill and Chili Time come to mind) around town. Repeat - I recommend the chili, I do not recommend the goetta.

I should point out before we go any further – Ohio is smoke free, Kentucky and Indiana are not. If you're a non-smoker and want to avoid the smoke, go to Ohio establishments. If you are a smoker, please be aware that you will not be able to smoke indoors (stadia included) in Ohio. If you don't care one way or the other, you just wasted 10 seconds reading this paragraph.

Now for some more traditional fare. I won't be mentioning chain restaurants because I don't need the comment count of this story to exceed 500, not to mention information on those places is more than handy elsewhere on the web.

Burgers, because it's what we do here at RR – Terry’s Turf Club and Gordo’s Pub & Grill have the best burgers in Cincinnati. Anyone who says otherwise is a damned idiot, end of story. Other contenders include Arthur’s Café, Zip’s, and Bard’s Burgers, where history once occurred(see the RR review). RR Reviews – Terry’s, Gordo’s, Bard’s

Pizza – Larosa’s is the locally based "favorite" but most people not from the area don’t like it. I love Aponte’s (NJ style), and people  Adriatico’s (Clifton, NY Style) and CHI-Nati’s (Kenwood, style).

BBQ – Montgomery Inn is another local favorite, although I'm more partial to Walt’s BBQ and BBQ Revue myself. City BBQ is another RR favorite with many locations throughout Cincy.

Sushi/Thai – I love me some Teak (Mt. Adams). Others to consider are Dancing Wasabi, Amarin, & Matsuya.

Steak – Jeff Ruby has steak on lockdown in the ‘Nati, with his downtown restaurant, The Precinct, and Carlo & Johnny.  Morton’s (chain alert!) is also very good.

Italian – Boca, Scotti’s, and Pompilio’s head the list here. Did you know that a scene from an old movie starring Dustin Hoffman and Tom Cruise was shot in Pompilio’s? Everyone here does.

Mexican – Nada (downtown) is the only "good" Mexican place I can think of off hand, but Rio Grande (in a strip mall no less) gets a mention since that’s where I always seem to end up when I'm craving an enchilada.

Ice Cream – Graeter’s is a local favorite, along with Aglamesis Bros.

Beer/Wine – Hofbrauhaus is a must stop for any beer aficionado, and Beer Sellar has an amazing array of beers available (and a water taxi to the game!).  If you’re into wine, try The Vineyard Wine Room in or Orchid’s at Palm Court.

MISC – Some places you might want to try for a variety of reasons: City View Tavern (pub food, ridiculous view), Chez Nora’s rooftop bar/jazz club(great ambience), Jean-Robert’s new place when it opens (link coming), Slim’s in Northside(fine gourmet food with a less than stuffy attitude), The Righteous Room (if you’d like to drink with some of Cincinnati’s "finest"), and if you feel like slumming it in a dive bar/burger joint straight out of the 50s, Herb & Thelma’s is the place to go. (not really, I just wanted to appease a couple of our more jackassish Red Reporters)

Lastly, our own Pops Daniels has volunteered his services if you have any questions, as he claims to have worked at or know someone at most of the worthwhile joints in town.

Okay guys, let me have it……what did I miss?