A Visitor's Guide to Cincinnati and GABP, Part 1 - Travel/Lodging

Share All sharing options for: A Visitor's Guide to Cincinnati and GABP, Part 1 - Travel/Lodging

Hi, hello, & welcome from the Queen City. We've been expecting you. The land of weird chili, even weirder sausage type breakfast food, and the oldest professional baseball team has been here all along and you've finally decided to get a taste of it. Congratulations on finally seeing the light, I'll be your tour guide. Trust in me, I'll show you the way.

Wanna get excited about coming to Cincinnati? Here's the skyline at dusk: 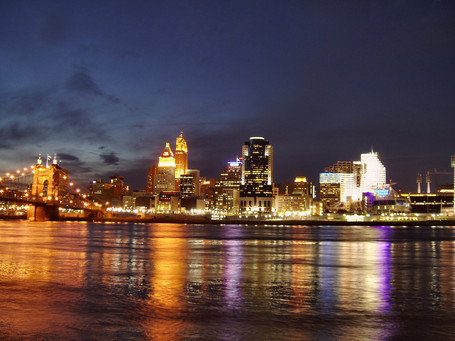 Now that the formalities are out of the way, the first order of business upon arriving in our great space is - where do you stay and how do you navigate Cincinnati?

First off, if you’re flying in and have never been here before – Our airport is located in scenic BFE, . Approximately 10 miles or so from downtown and the stadium, cabs are available to get you to your lodging arrangements but there is a much better option. Which leads me to this:

Don’t rely on public transit here. Don’t do it. I cannot stress this enough. Rent a car, familiarize yourself with the highways, and drive.  The bus system is damned near useless, the cab situation is not much better (except for the airport), and mass transit does not exist. Unless you will be staying downtown and like to walk, rent a car.

Should you want to take the bus, our good friend muffins (we do have the finest) has this to say:

Just go to www.go-metro.com. One easy rule: all buses except 3 (the 31, 41, and 51) stop at Government Square, which is 3 blocks from Great American Ballpark.

There’s even a TANK bus you can take from the airport to downtown, though I’ve never taken it.

If you are driving in you already have a car but you still need to know how to get around, so here ya go:

I-75: Runs North/South and passes downtown on the West. Joined with I-71 through .

I-71: Runs North/South to the river before running along the southern edge of downtown and passing it on the East side.

I-275: highway that encircles the Greater Cincinnati area, the airport is located in the Southwestern portion of the loop in NKY.

I-471: A secondary connector to downtown from the Southeastern portion of the I-275 loop in NKY.

Since you'll be here during the warmer months, expect to run into construction at some point. Baseball season coincides with Orange Barrel season here.

Park downtown: Usually runs about $10 or so (except for Opening Day when it's considerably more), plenty of options around the stadium. My favorite spot is the parking garage next to US Bank Arena, on East Pete Rose Way (it's the pie shaped building on the map).

Park in Kentucky & walk/ride over: One of the fun things to do if the weather is nice is to park/pregame at on the Levee (entertainment complex across the river in KY) and walk across the (the white one) which will feed you onto the exterior concourse of US Bank Arena, right next to GABP. Another option from NKY is taking the TANK Shuttle for the low, low price of $1.50. The shuttles run every 15 minutes from many convenient locations in Covington & Newport. If you happen to be at The Beer Sellar (and you should be, more on this tomorrow) you can take a water taxi ride for $5 round trip while your car sits safely in their parking lot.

As a local, I don't spend a lot of time in hotels so you'll need to rely on online listings and possibly the advice of my fellow RRs below, should they be willing to share it.There are plenty of fine hotels downtown, but obviously they will come at a higher price than the cheapies on the outskirts of town. If you're coming in via Kentucky you could always stay at The Wildwood Inn in Florence, KY (about 10 miles South of the river) which specializes in themed rooms and is very close to our local independent minor league squad, The Florence Freedom. If you're coming in from the North there's always Great Wolf Lodge which is right next to King's Island amusement park, which is about 15 miles North of the river up I-71. Your best bet coming South on I-75 would probably be Sharonville since there's a "Convention Center" there.

I'm sure I've missed something important so please feel free to comment below if you have a question or would like to make a suggestion, and I'll edit the story to add it.