Share All sharing options for: Reds win another, and college football games are somehow more interesting.

This team just refuses to give up the possibility of a .500 season.

That would be Jay Bruce, who went 2 for 3 with two walks, a double and a HR.  Not a bad night for him.  Sure, Joey Votto continued to play quite well (three doubles and a walk!), so it's close.  Laynce Nic also had a walk and a sacrifice fly to go along with his HR, and even CORKY FREAKING MILLER had a double (and a single!).

To make a long story short, the Reds scored a lot of runs.  Lehr tried to give up a ton of HRs again, but only allowed two, plus two more runs in the fifth.  He was pulled after that, and then Owings, Herrera, Masset, and Burton combined to pitch four shutout innings.

But mainly, there's still college football going on.  Clearly, you'd rather discuss that.  But one more thing.  Check out this FanGraph: 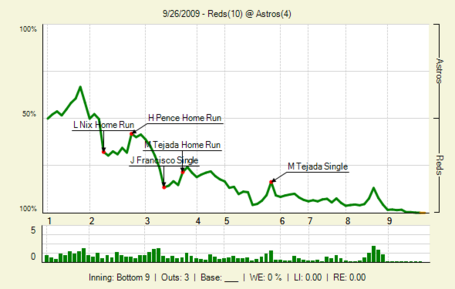