Reds use Tresselball to beat the Marlins 3-2, by taking an early lead and sitting on it.

Share All sharing options for: Reds use Tresselball to beat the Marlins 3-2, by taking an early lead and sitting on it.

Sorry for the lateness of the recap.  I fell asleep.  You'd think the scintillating repartee in the game thread would have left me wide-eyed, but no.

Matt Maloney.  The rookie earned his first major league win, and did it in gritty style by fighting through the pain caused by a blister on his finger.  He went five innings, gave up two runs (same ERA as a quality start) and struck out three while walking one.  Darnell McDonald had two hits, Jay Bruce had two RBI, and the bullpen pitched four scoreless innings. 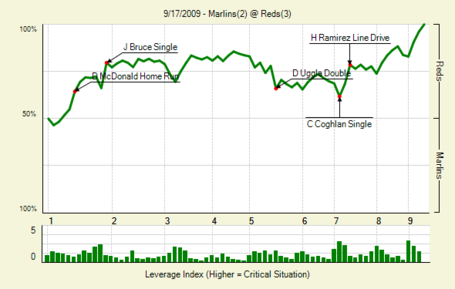