Just Like They Drew It Up. Reds Win 7-5 to Break 5-game Losing Streak.

Share All sharing options for: Just Like They Drew It Up. Reds Win 7-5 to Break 5-game Losing Streak.

Drew Sutton. Sutton only saw three pitches all day, but that was enough as his 2-run pinch hit double in the 9th inning was the difference for the winning squad.

The story of the day today was base runners, as in the Reds had 21 of them when you add up the 10 hits, 8 walks, and 3 errors by the Cubs.  Thankfully, they managed to get some hits today with runners on base, going 5 for 13 with runners in scoring position. 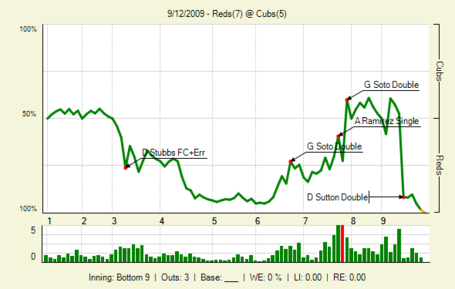