Dusty Baker has no idea what the hell he's doing, the bullpen loses this one 7-4

Share All sharing options for: Dusty Baker has no idea what the hell he's doing, the bullpen loses this one 7-4

The obvious choice here would be Albert Pujols, but you know what, I'm going to say it's Homer Bailey.  Homer went 7 1/3 innings, and left the game with a goose egg on the board before the manager decided he didn't deserve to win.  His line showed 2 runs, 2 walks, and 5 strikeouts, but it doesn't do his performance justice.  After putting two on base to start the game, he put down 13 Cards in a row before hitting Joe Thurston by a pitch, and retired the next 7 before giving up a double to Yadier Molina.  He had all three pitches working well, with his fastball getting up to 95 consistently and his new splitter working as advertised.  He deserved this one. 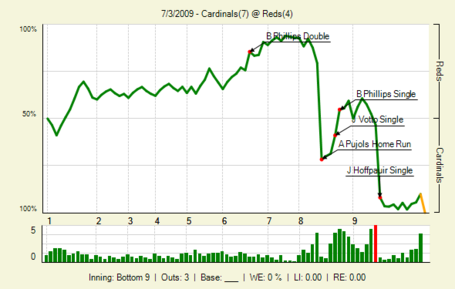