Share All sharing options for: Thinking about Aaron Harang

First off, using Beyond The Box Score's Trade Value Calculator, we can estimate Harang's net value at about $8 million.  This takes into account the remaining value on his contract plus a simple projected value that I gave him for the remainder of that contract.  Obviously that projected value is a bit of a guesstimate, but I tried to be conservative - I gave him 1.5 WAR for the remainder of 2009 and 3.25 WAR for 2010.  I assumed that his 2011 option wouldn't be picked up and added the $2 million buyout into his 2010 salary.

Once again, we're dealing with an estimator, but that estimator only projects Harang to be worth a pitching prospect that is around the 100th best prospect in baseball.  I think this is probably a little low since I think general managers intrinsically value established pitchers more than prospects (as they should) and also because Harang is going to be worth more to a team that is a game or two out of the race than just any average team, which the calculations in BtB's spreadsheet assume.  So, let's bump up that estimate a bit and say that Harang is worth a player who is in the 75-100 group in terms of prospect status, plus maybe a throw-in minor prospect.  I'm trying to keep things reasonable, but also bump Harang's value a bit for our purposes.

That sort of prospect could be very valuable over the long-term.  He's likely thought of highly enough to be a future regular in the big leagues.  However, it is unlikely that somebody in that range is going to come in and provide 3 WAR for the Reds in 2010.  So, if the Reds are serious about being contenders in 2010, they will need to use the money saved by trading Harang and sign somebody to help make up for what they've lost.  There are some possibilities on the free agent market, but I wouldn't say that the market is overflowing with game changers this off-season.  Not to mention the fact that it's hard enough to find 3 WAR players in the first place.

So, I stand by reasoning for not wanting to trade Harang.  However, I do have some concerns about him that I'll express after the jump.

One good thing about Harang this year has been the fact that he appears to have recovered some of the speed on his fastball that he lost last year.  In fact, checking the Pitch FX graphs at FanGraphs shows that Harang appears to be getting stronger with his fastball as the season progresses: 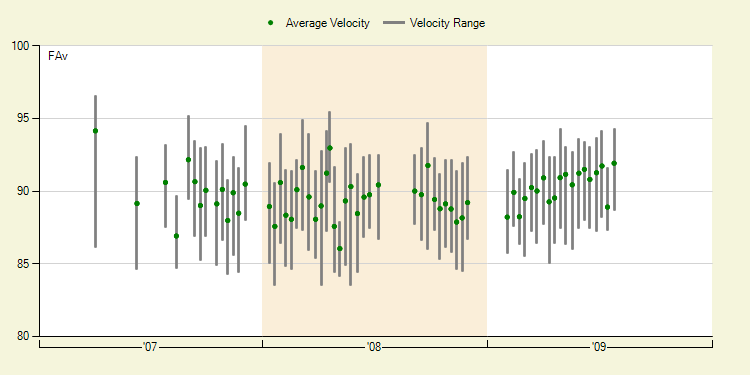 This data has not been corrected for park effects, but I'm not sure that matters so much that it would eliminate the obvious trend upward in the speed of his fastball.  In fact, on average, his fastball looks a lot like it did in 2007, though it has slightly more horizontal break and slightly less vertical break.  It's lost some of its value since then, but I have a feeling that has as much to do with his other primary pitch as anything.  It's hard to be a one pitch pitcher and have a ton of success with that pitch.

The real problem for Harang has been his slider.  In 2007, he had one of the top 10 most valuable sliders in baseball.  He didn't throw it as hard as some pitchers, but he had some excellent movement on it, both horizontally and vertically.  That started to slip in 2008 and this season, as his slider is nearly flat vertically.  Lacking that break, his slider has gone from one of the most dominant to perhaps the least valuable slider in the league.  His slider is estimated to be 7 runs worse than  the average slider this season.  That's a drop in value of nearly 20 runs since 2007.  If you think there is a problem with Harang, I think that is where you need to look.

I've only done a little bit of research beyond what I put here.  I looked the release point of his slider compared to 2008, which is the only other data I have, and it appears to very similar on average.  I don't think that rules out a bad release point, but I don't have the data from 2007 to be able to judge if there has been a change since then.  It seems logical though that if he's losing vertical movement, he's likely not getting on top of the slider as much as he used to.  I'll try to get to the 2007 data and see if that shows up there.

So what do you think?  Given the potential return and the potential issues with a key pitch, is it worth trading Harang at this point?