I know this post is probably too late for this season, but it's really in response to this post at The Hardball Times, which Scrabbles pointed out in today's Reposter.  Evan Brunell's post points out a couple of hit charts at GABP for Jay Bruce, showing his flyballs at GABP over the last 2 years.  I actually don't think this shows us too much since we're talking about a small sample of a small sample in the first place.  That's not to say Brunell is wrong though.

I think that one strong indicator for a flyball hitter as to whether or not they are trying too hard to pull the ball is not really their flyballs or home runs, but their groundballs.  More specifically, when you look at how a hitter handles pitches on the outside half of the plate, you can get a really good idea of whether or not they are consistently trying to pull the ball.  If you see a lot of groundballs to the pull side on those pitches, I think you've got a player that is trying to pull the ball too much.  If you compare Bruce's charts for 2008 and 2009, you'll see that he appears to really have changed his approach: 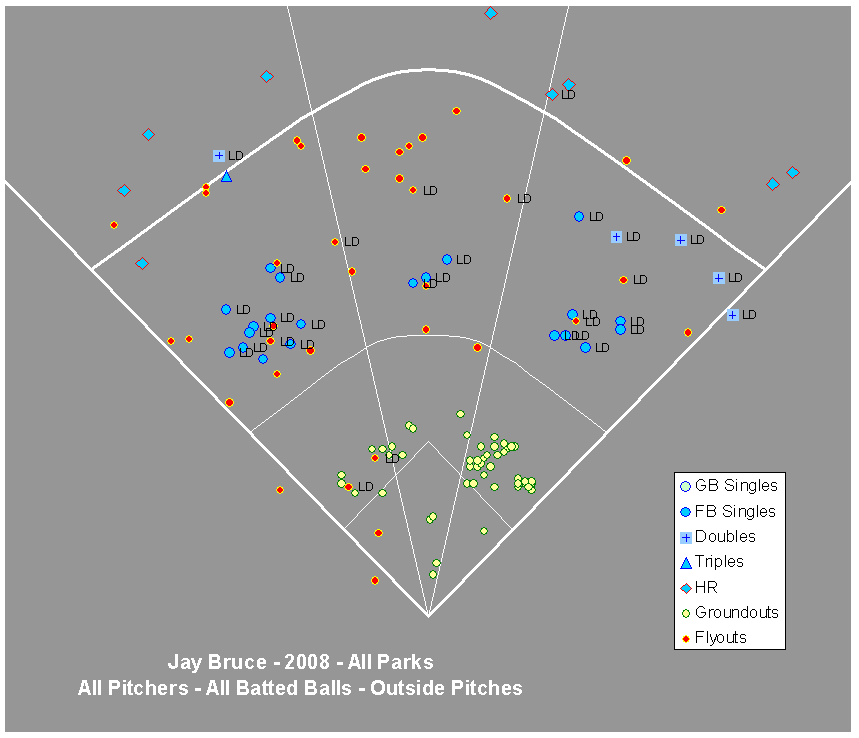 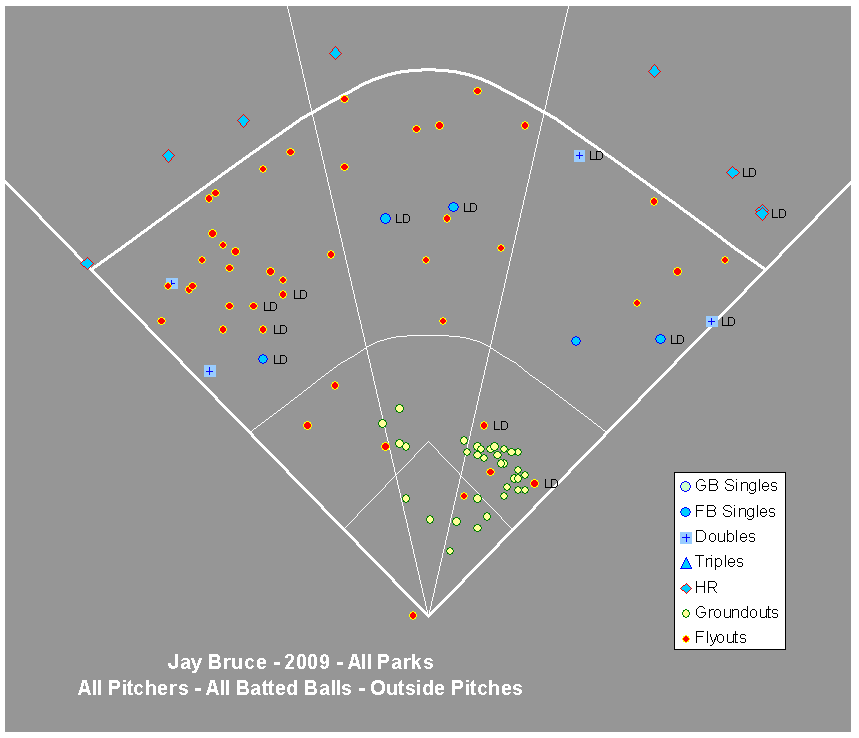 Both of these graphs are solely based on pitches on the outside third of the plate.  In 2008, Bruce was hitting these pitches to all fields, for all batted ball types.  In 2009, not so much.  In fact, if I had one guess without looking at his actual swing, these data would indicate to me that when the pitch is on the outer half of the plate, if he goes the other way with it, it is likely a lofted flyball.  Perhaps he's trying to lift the ball out there rather than drive it.  However, if he's trying to pull it, he can't get under the pitch and therefore is topping it to the right side.  This is very different than what he was doing in 2008, when he was doing more of slapping the ball the other way, which is why we see a lot of line drives dropping in front of the left fielder.  This is also why you see more ground balls that way as well.  In fact, his hit chart from 2008 looks similar to the one I posted for Chris Dickerson a couple of weeks ago.  Pulling the ball isn't always a bad thing, but there is something to be said for hitting the ball where it is pitched.

Bruce clearly has the power the other way, but I think he may have been pressing too much.  I know it's all too late now, but if there is something I would suggest for him to work on when he comes back, it would be to try to not force the issue with his power.  It's cliche, but take what the pitcher is giving you and you will be a much better hitter.  Also, stop swinging at those pitches in on your hands that you can't do anything with.