Chris Dickerson has had an up-and-down year, or should I say and down-and-up year.  He started the season pretty well but then went in a prolonged slump after the first week.  On May 11th, he saw his batting line dip to a season low of .197/.316/.288.  Fans were demanding that he be benched or even sent back to Louisville.  It seemed clear to many that proclamations of Dickerson being nothing more than a 4th outfielder were too generous.

Dusty Baker ended up swapping Dickerson out in place of Laynce Nix in left field.  Chris became the main lefty pinch hitter and occasional spot starter in the outfield.  Slowly but surely his bat started to come around and since his low point back in May, he has batted .341/.433/.477.  When Willy Taveras went down with an injured hamstring, Dickerson got some starts in centerfield and displayed some excellent defense up the middle.  Slowly, the tide has shifted in favor of the young left-handed hitting outfielder.  Now many of those fans who wanted him demoted likely wouldn't mind if he was starting in centerfield and leading off on a regular basis.  It's funny how a long baseball season can do that.

I've been watching Dickerson a little more closely over the last couple of weeks and I've started to notice a pattern in his approach.  Obviously he's a very patient hitter - he has the highest walk-rate on the team and only Joey Votto and Ryan Hanigan see more pitches per plate appearance - but he's also more than willing to take what the pitcher gives him.  In many ways, he's been the type of hitter that Baker would love his whole team to be.  Besides Votto, I don't think there is a hitter on the Reds that uses the whole field as well as Dickerson.  I think this is demonstrated in the hit chart below. 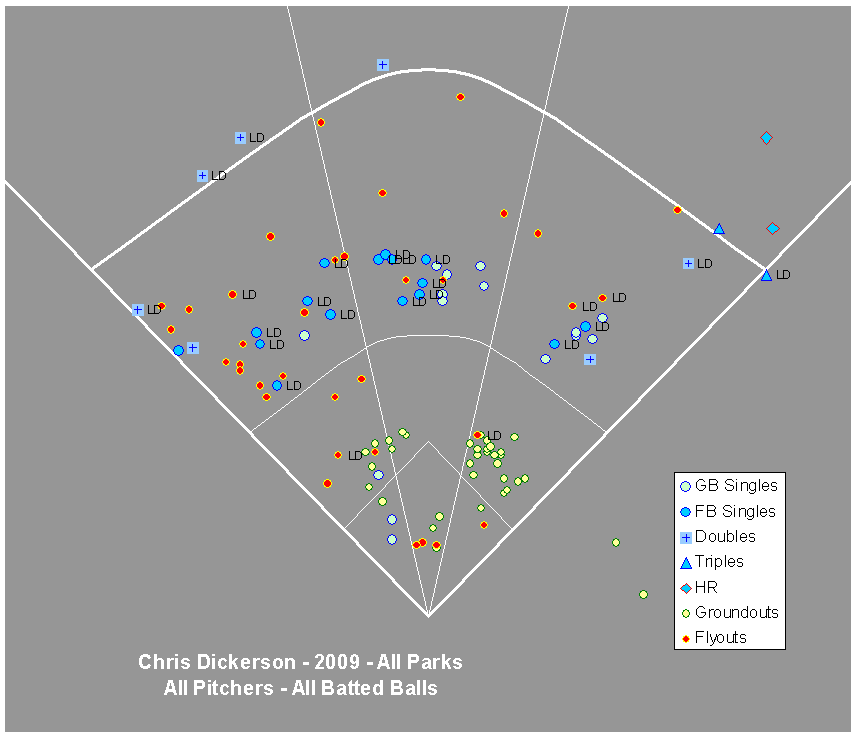 As you can see, he doesn't drive too many balls deep to the wall, but what he lacks in power he makes up for by using the entire field.  I've labeled the line drives with LD because I thought it was particularly interesting how the majority of Dickerson's line drives are the type that land in front of the outfielder.  This is one thing that I've noticed especially while watching him.  He uses that gap between the infield and outfield quite a bit.  While this is cool and all, I'm a bit concerned that teams will start to play him a little more shallow to cut off those types of hits.  Hopefully at that point, he will be able to start driving the ball over their heads and make them pay.

See some more graphs of Dickerson's approach after the jump. 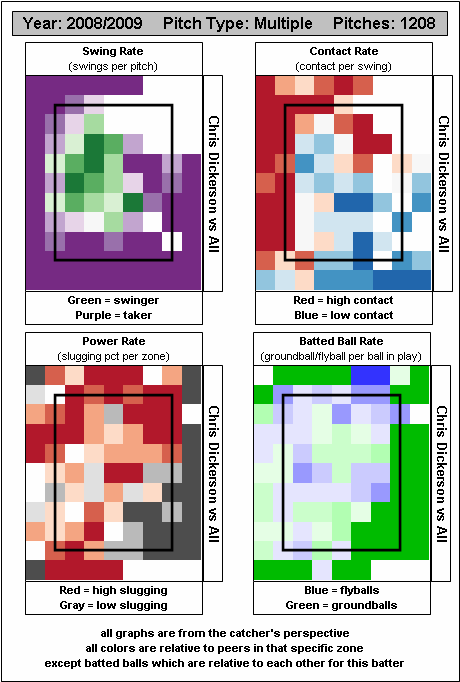 As you can see, Dickerson likes the ball out over the outside half of the plate.  He doesn't make great contact there, but he makes much better contact there than compared to other parts of the zone.  His power is typically on pitches up in the zone, where again he makes good contact.  He can't do much with pitches down and in - typically the wheelhouse of a left-handed hitter - but he appears to realize that and doesn't swing much at those pitches.

These last sets of graphs are more spray charts, but this time they are broken down by the portion of the plate that the pitch crosses.  I think these graphs especially demonstrate how Dickerson is simply taking what the pitcher gives him.  Most of the time when he pulls a pitch, it's on the middle portion of the plate.  When the pitcher starts working the outside of the plate, Dickerson tends to go the other way with the ball.  That's a pretty good approach. 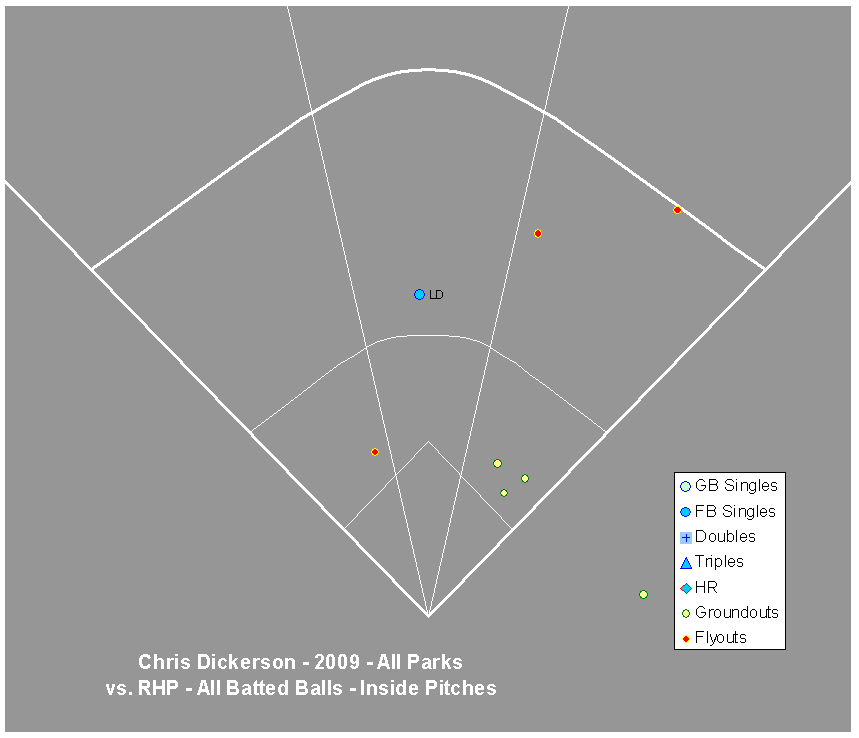 Split: Inside | Middle | Outside

Again, he doesn't put many balls on the inside of the plate into play, but he clearly uses the entire field when the ball is over the rest of the plate.  I know Dickerson isn't a young guy for someone only in his 2nd season, but that's a very mature approach at the plate.  He's never going to be a huge power guy, but if he can continue to keep a balanced approach and continue to be patient at the plate, he might manage a couple of decent seasons as a regular in the big leagues.