Graph of the Day: This Offense Really Hurts

Share All sharing options for: Graph of the Day: This Offense Really Hurts 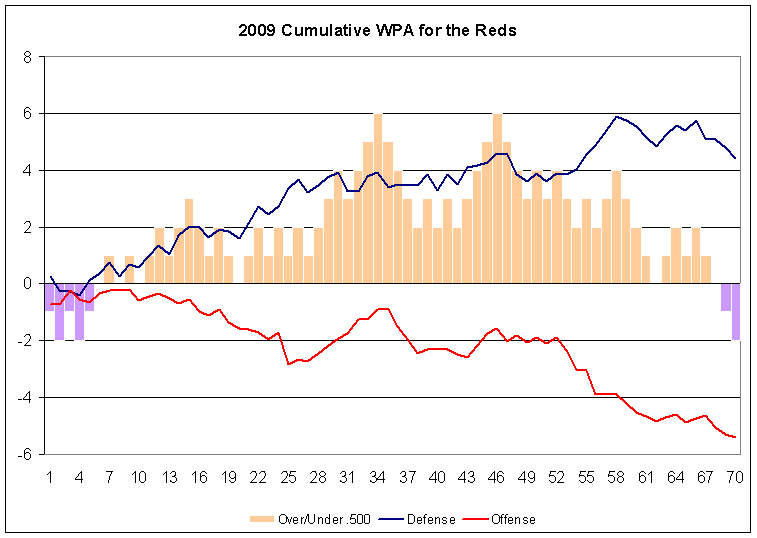 I don't reference WPA (Win Probability Added) much, but this post at Viva El Birdos struck me as an interesting way to look at the contributions of both the offense and defense to a team's wins.  For those that are unfamiliar, WPA represents the change in win probability from the start of a play to the end of a play for each play in a game.  The probabilities are based on historical games and the frequency with which a team will win a game given the specifics of that situation in the game (i.e. inning, base runners, outs).  It's a different way to look at who did what in the game by taking the context of the situation into account.

From time to time, people reference WPA for individuals, which I'm not a big fan of mainly because I don't like how win probability is divided up to only batters and pitchers.  However, I do think it is useful at the team level to identify contributions made on each side of the ball.

For instance, as you can see from the graph above, the pitching and fielding have consistently contributed positively to the team as the season progresses, though they have slipped up a bit over the last week.  The offense, however, has clearly been a hindrance.  Except for a stretch in early May when they were actually a positive force, and an equal stretch at the end of the month when they were just not doing damage, the offense has been a drag on this team from day one.

I know none of this is new to most of you, but seeing it in graph form this way really struck me as to the degree with which the offense has been a drain.  It's a shame to see so much good pitching and defense go to waste.