Share All sharing options for: Game 65: Braves at Reds

Twenty-five-year old Matt Maloney isn't the prospect that 22-year old Tommy Hanson is. Few pitchers are. But this is still a very interesting match up of two young pitchers who were having outstanding seasons in Triple-A this year. Hanson is perhaps the top pitching prospect in all of baseball. He struck out an incredible 35% of the batters he faced in the minors this year (12.3 K/9), while maintaining some very good control. That control has slipped a bit in the Majors, as Hanson walked 5 in his last start against the Orioles. He's still striking batters out though, taking down 10 in his 11.2 innings pitched so far. He's also managed to get his first big league win under his belt, something that has eluded Maloney to this point.

That's not really Maloney's fault though. In his first start, David Weathers blew a 3-2 lead in the 8th inning to take the win away from Maloney. In his second start, the offense could only muster 1run on 3 hits against Luke Hochevar. Such is the life when you pitch for the Reds in 2009.

The Reds are going for the series sweep this afternoon, a welcome change after the craptastic performance in Kansas City. As is the theme for this season, there is rain in the area. As of 10am, it looks like this game may not kick off on time: 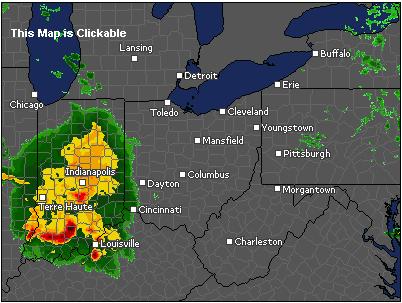 Since this is the last time the Braves are in town, they most certainly will do what they can to get this game in. It just might be a while until we get there.