Off Day Happy Thought: The Reds Used to be Really Good at Shortstop

Share All sharing options for: Off Day Happy Thought: The Reds Used to be Really Good at Shortstop

Prior to that we saw the likes of Felipe Lopez, Juan Castro, Royce Clayton, and Pedro Lopez digging in at the shortstop position.  It's hard to believe that shortstop used to be the most stable position in the organization's history.

From 1952 until 2004, the Reds had 76% of their starts at shortstop come from 4 players: Roy McMillan, Leo Cardenas, Dave Concepcion, and Barry Larkin.  That is some ridiculous stability at one position.  As a comparison, in the 721 games since Barry Larkin retired in 2004, there have been 13 different starters and the top 4 starters combined to barely reach 76% of those games.  Truly amazing.

As an off-day distraction from this past week's suckitude, I thought it'd be fun to reminisce a bit about those shortstops of yesteryear.  Being a stathead nerd, of course I'm going to do it with numbers and graphs, like this one: 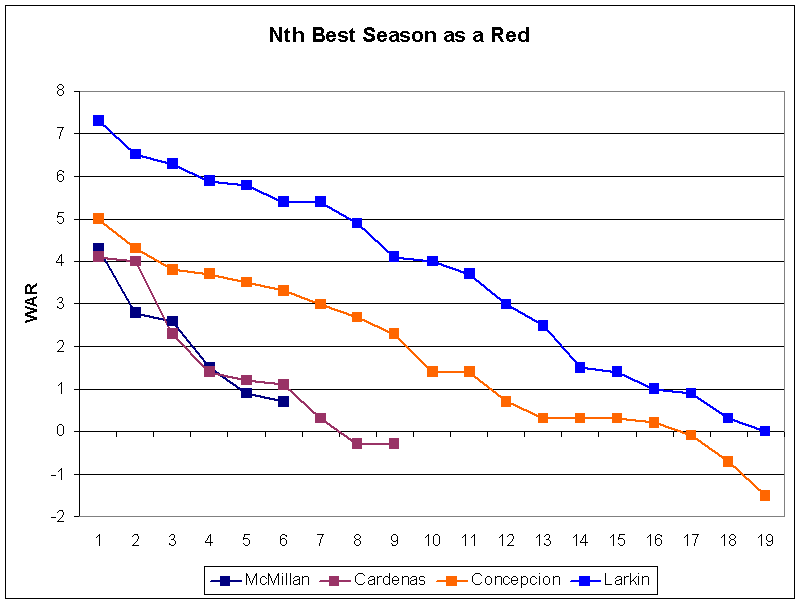 This graph shows each player's Wins Above Replacement (WAR) sorted from their best season to their worst (data courtesy of BaseballProjection.com).  McMillan and Cardenas weren't at the same level as Larkin and Concepcion, but they were still very good shortstops for their day. And Concepcion, though not much with the bat, still had some very good years under his belt at shortstop.  Of course, none of them compare to Larkin at his best, but then very few shortstops in the history of the game do.

If we break down their seasons into components, we really see what a well-rounded player Larkin was, and how specialized the others were: 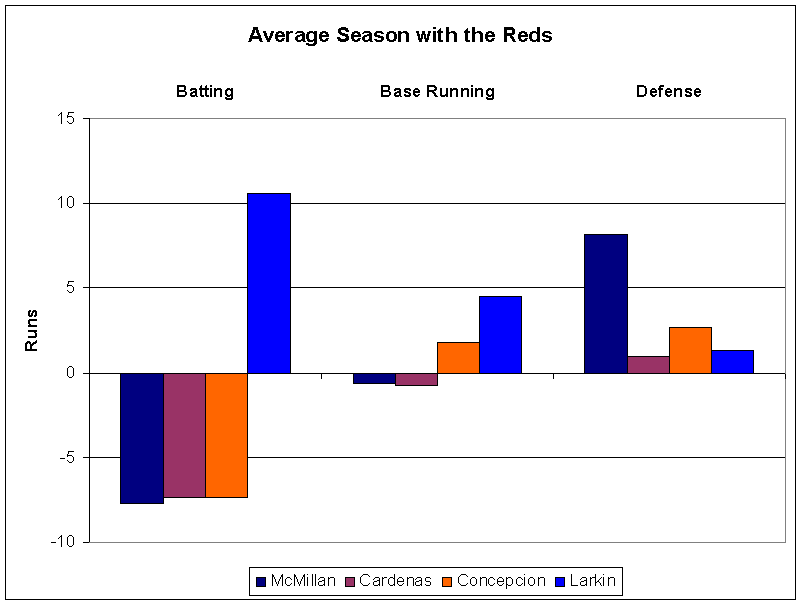 The three shortstops before Larkin played in a completely different era where good glove, no-hit shortstops were the norm.  What amazes me most about this graph is how much better Roy McMillan was defensively than the others, though a caveat should be placed on this.  McMillan only played with the Reds until 1960 when he was 30 years old before going on to play for the Milwaukee Braves.  He was still very good defensively for the Braves, but as is typical, his skills declined over time.  Because Concepcion and Larkin both played with the Reds into their late 30s, their numbers suffered some because of their natural decline.  At their peaks they were comparable to McMillan, but Roy was still slightly superior defensively.

It's doubtful that the Reds will have such stability at shortstop again in the near future.  Chris Valaika is probably next in line for the job, but there is serious question about whether or not he has the glove to man the position in the Majors.  Zack Cozart appears to have the glove, but there are uncertainties about his bat.  I suppose it's possible that either of those guys could end up locking down the position for a decade, but it's unlikely.  Let's face it, we were pretty spoiled for a long time there.