You may recall back in April that I noted that Edinson Volquez could be tipping his pitches based on a different release point between his fastball and change up.  I believed that this, coupled with the fact that Volquez was having trouble finding the strike zone, was making it easier for hitters to guess on his fastball or change up.  And making it easier for the hitter to guess is how you end up with an ERA over 9 after your first two starts.

You'll be happy to know that Volquez has improved on both accounts as the season has progressed.  After hitting the strike zone on just 40% of his pitches in his first two starts, he's up to 48% for the last 6 starts, a fact that has had a domino effect on the rest of his performance:

Now that he's around the strike zone more, Volquez has seen more swings from hitters, as well as more swings and misses and foul balls.  In fact, hitters are putting the ball in play 6% less now when they swing than they did in his first two starts.  Volquez has such electric stuff that all he has to do is convince hitters that he can throw a strike if he needs to and that forces them to be ready to swing even when it's not a strike.  And I'm told that getting hitters to swing at your pitch is kinda the goal of pitching.

Besides throwing more strikes, Volquez is also much more consistent with his release point, especially when you compare his fastball to his change up.  When we looked at the difference previously, we saw a chart that looked like this: 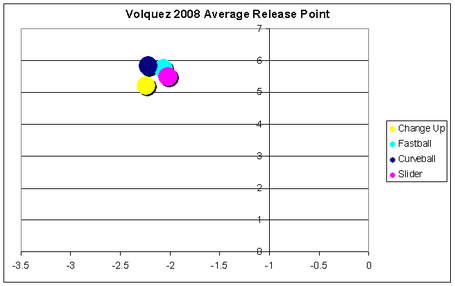 As you can tell, there is a clear differentiation between the release point of his change up and his fastball, 6.5 inches total, including over 2 inches of difference in the horizontal.  It's not out the realm of possibility that a hitter who is looking for a fastball or change could see the difference in arm angle from Volquez and know what's coming much more quickly.

It would appear that Volquez has been working on correcting this difference though because this is what his average release points have looked like over the last 4 starts: 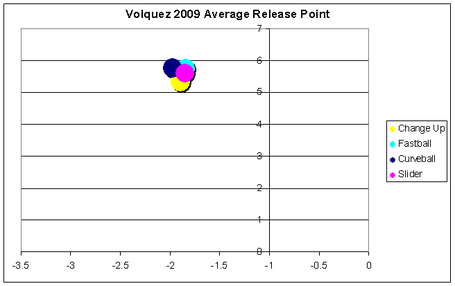 Now we're seeing a difference in release point between the fastball and change up that is about 5 inches total and less than 2/3rds of an inch on the horizontal axis.  A much more compact set of release points means much less information for the hitter to use to differentiate the fastball from the change up and every split second the pitcher can grab from the hitter gives him that much more of an advantage.

Now the question is whether or not he is healthy enough to perform like he has over the last month or so.   I guess we'll find out tonight as he opens the four-game series against the St. Louis Cardinals.