The Bronx Bombers have too many starting pitchers, while the Baby Bombers don't have enough. But the transactional rules of baseball don't allow them to swap. So long time ace Chien-Ming Wang languishes in the pen, while in Scranton, the bullpen is part of the rotation, with several relief pitchers cobbling together a start.

First up was Romulo Sanchez: 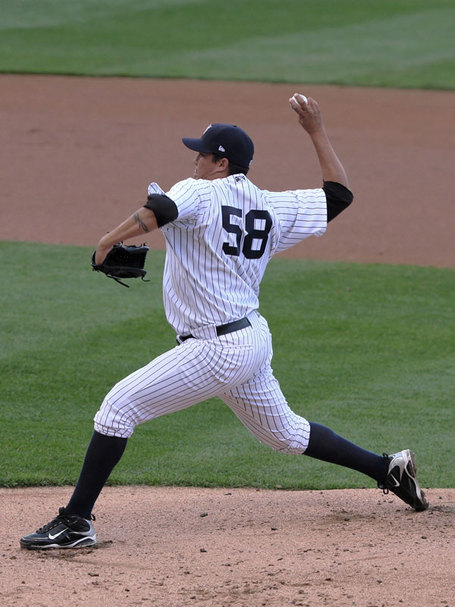 He lasted 2.1 innings - not bad for a relief pitcher. 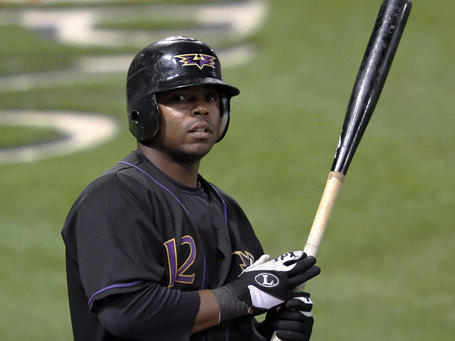 Drew Stubbs stuck his tongue out at me, that perv!  (For some reason, half the pics I took of him, his tongue is sticking out.) 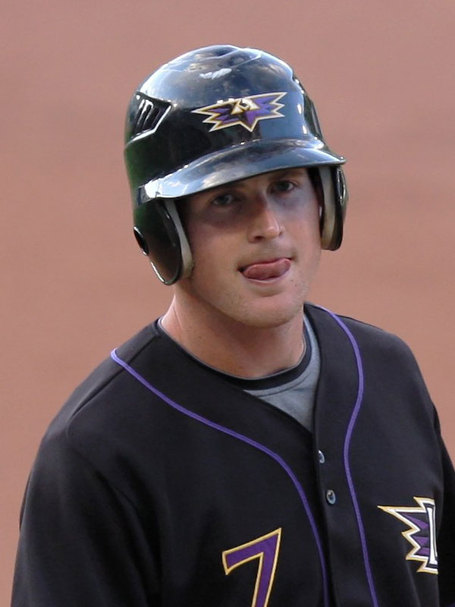 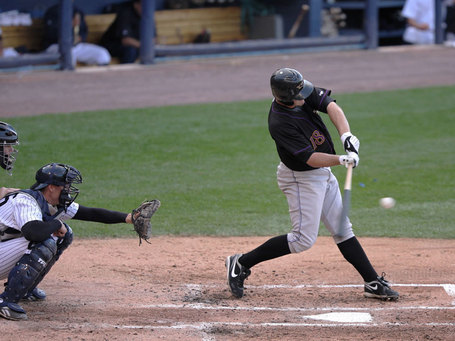 Bankston waits for someone to bring him his cap and glove. 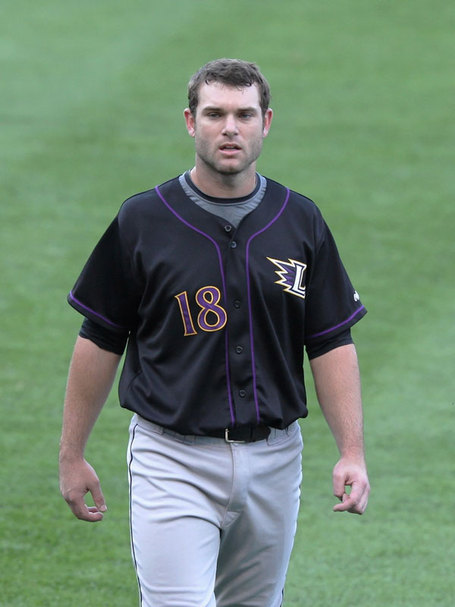 Going for the Bats was The Bobblehead, Sam LeCure: 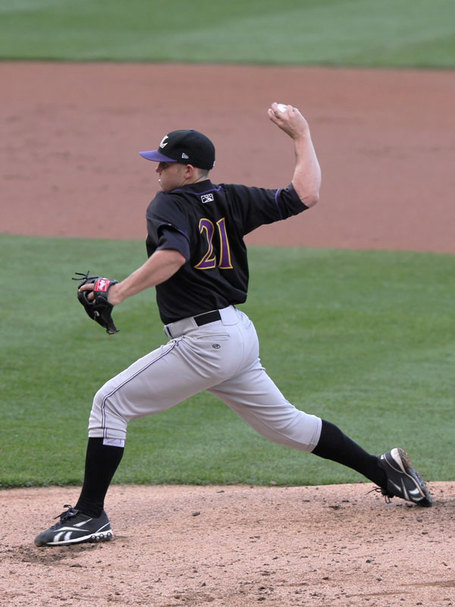 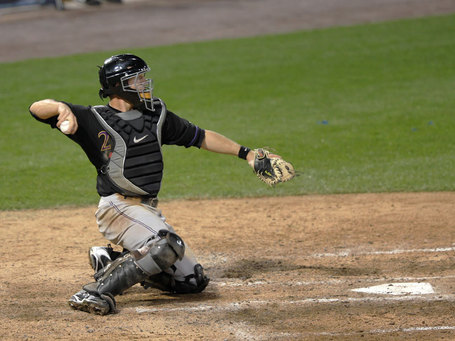 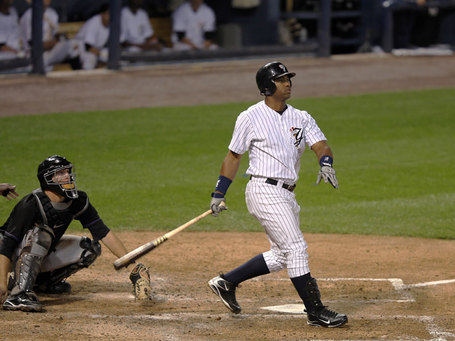 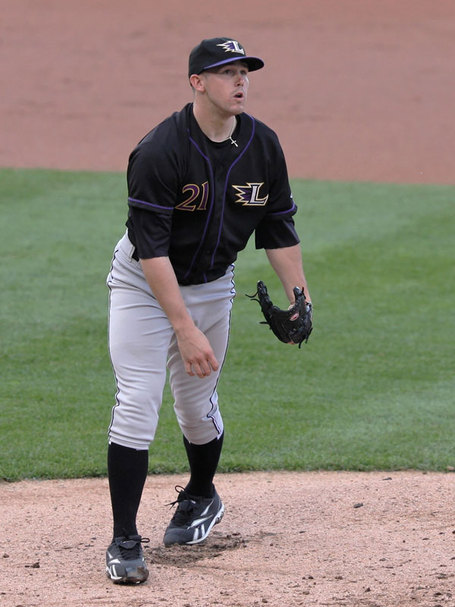 Meanwhile, I noticed a guy with a camera on a tripod wandering around the lower level, "borrowing" various empty seats to capture the action on the field.  The first thing I noticed was the tripod.  I didn't know they allowed those.  Would they let me bring a tripod?

Then I noticed the guy was Asian.  Figures.  Those Japanese and their cameras. ;-)  Then I noticed he looked famiiar.  It was Kei Igawa: 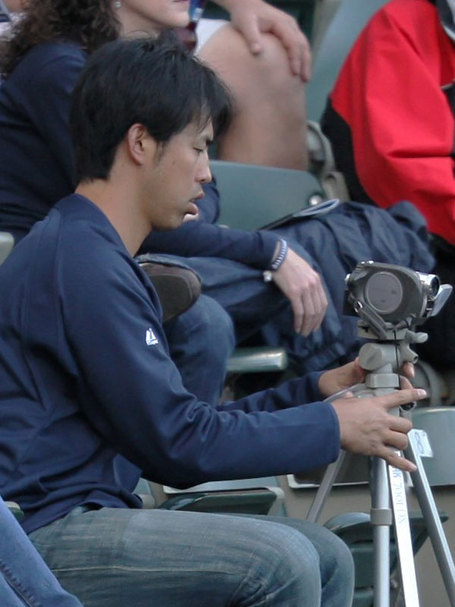 I guess he helps out any way he can when he's not pitching.  I've seen him coaching first base.  Apparently, he films at-bats for the SWB Yankees, too.  Nice to know that the Yanks are getting something back for that $46 million they spent on him.

Boy, is he tall.  They have a pretty steep cant in the lower level of PNC Field.  Two steep steps between rows. I've never had problems seeing over people's heads before.  But when Igawa sat in front of me, he blocked my view.  A lot of his height is in his torso, rather than his legs; he's got a lot of "sitting height."  A Japanese art professor once told me that that was the ideal in ancient Japan: short legs and a long torso.  It made for a more elegant line when kneeling, as was customary in Japan.

It took awhile, but fans started to recognize him, and came up to ask for autographs.  He obligingly signed everything thrust at him, but didn't say anything. Probably because of lack of English rather than unfriendliness.  (I looked over his shoulder while he signed.  I've always wondered if Japanese players in the US sign in English or Japanese.  He signed in Japanese.  Just one kanji character, so it wasn't even his whole name.)

Back to the game...the Bats drew first blood, scoring one run in the 3rd.  Hopper singled, and a couple of walks and a sac fly later, he scored. 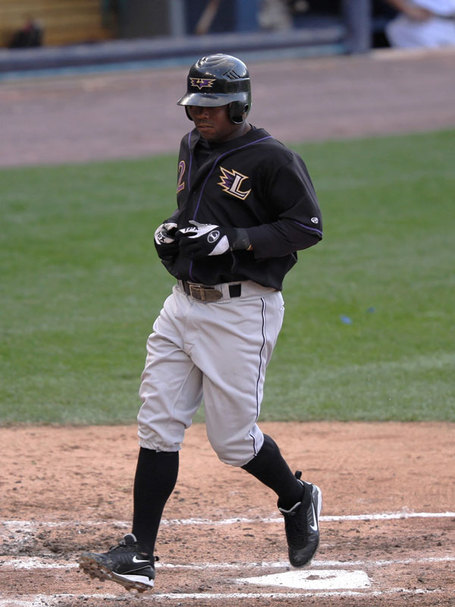 Stubbs was one of the walks, and got to third on the other walk (by Kevin Barker) and the sac fly (by Bankston). 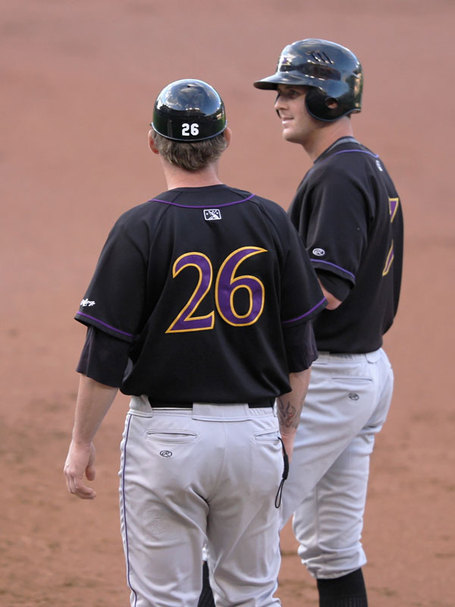 The problem with being on third base is you have to listen to Rick Sweet's fish stories yet again. 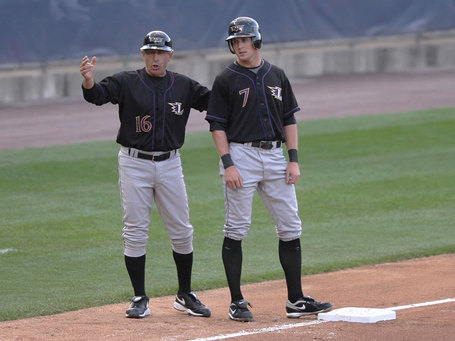 Stubbs ended up stranded.  Hopper's run was all the Bats would get.

For awhile, it looked like it would be another pitcher's duel.  Then Shelley Duncan came to bat in the 4th, with Austin Jackson on 2B.  Duncan has been hitting very well lately.  I had a bad feeling about it, and sure enough - two run homer. 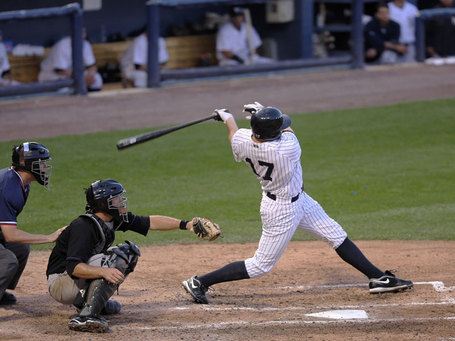 The SWB Yanks celebrate, with Tatum in the background. 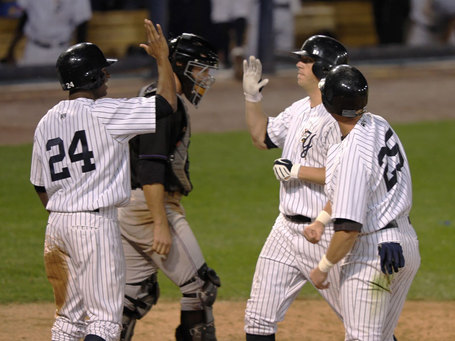 The floodgates opened in the sixth.  LeCure was starting to struggle. 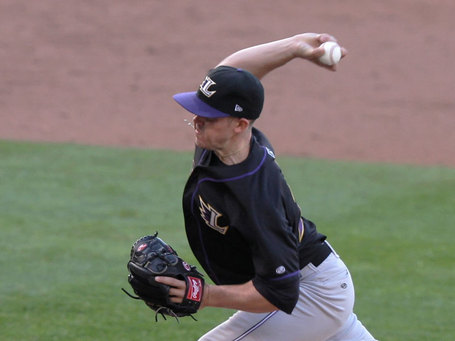 He gave up a single, a walk, and then another home run to Shelley Duncan.

Rick Sweet came in and took the ball, sending the Bobblehead to the showers. 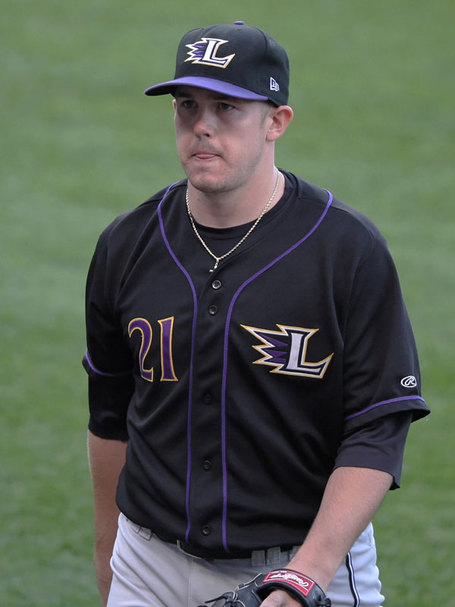 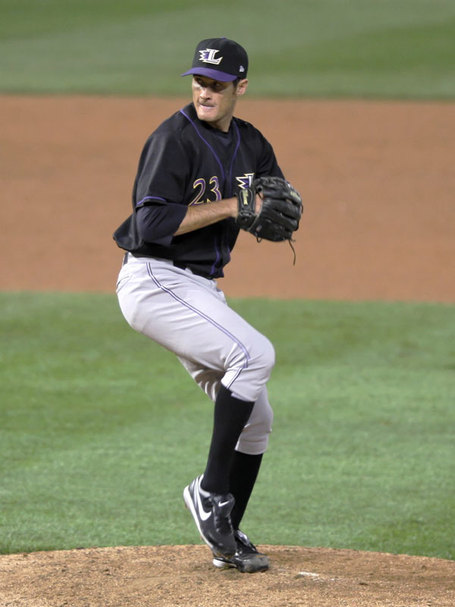 And promptly gave up another homer, to John Rodriguez.

There were a couple of amusing incidents with foul balls during the game.  The video camera in the SWB dugout was nailed.  It was hit hard.  (It's pretty near home plate.)  The camera man is signalling that everything's okay. 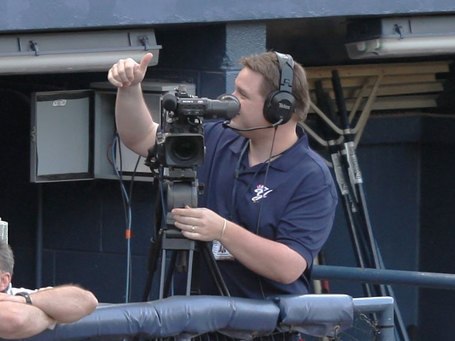 There was also a foul ball that was hit straight back, up into the third level.  It flew right at an usher's head.  He ducked, then stood up triumphantly...only to be hit in the butt as the ball bounced off the stairs behind him.

Griffin and Barker nearly collide. Barker made the catch. 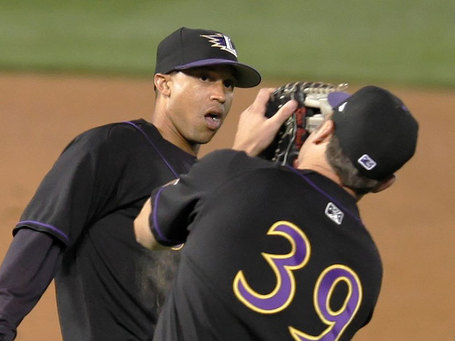 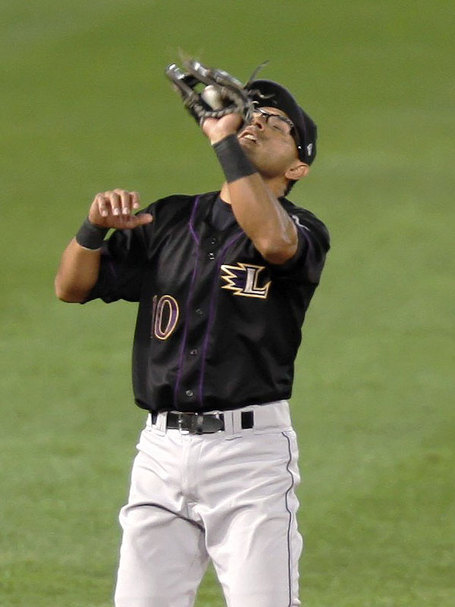 The Bats had their opportunities, but just couldn't cash them in.

Stubbs was 0 for 2 with two walks. 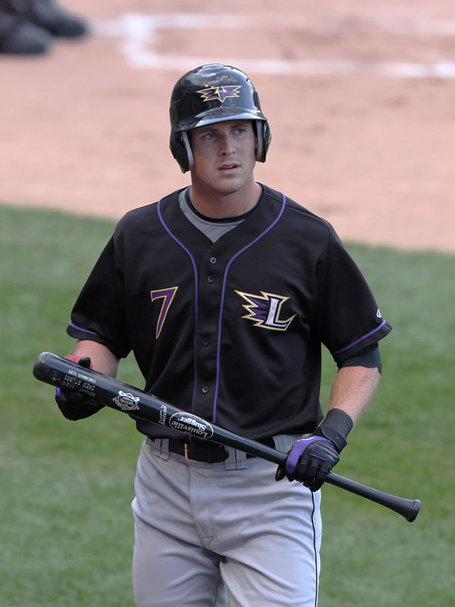 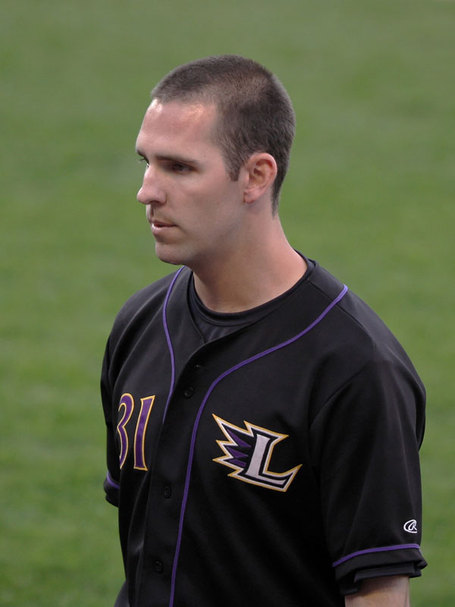 Danny Richar was 1 for 4, but did this cool "spinning his batting helmet" thing when he did get on base. 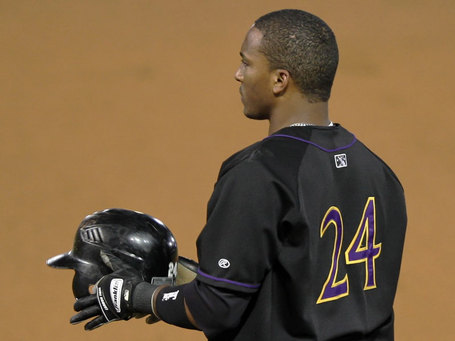 Stubbs sums up the game perfectly: 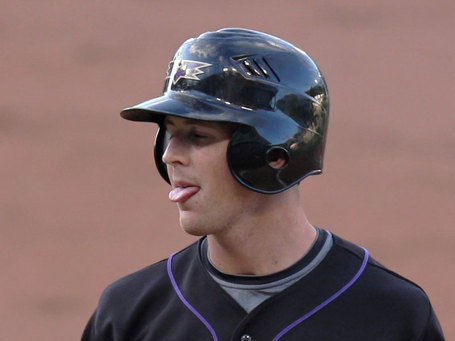