Reds on the Basepaths - Not the HAVOC that We Expected

Share All sharing options for: Reds on the Basepaths - Not the HAVOC that We Expected

After all of the talk of aggressive base running during the Spring, I think we are all a bit surprised to see that the Reds are only 8th in NL in stolen base attempts.  I know I expected to see them run a lot more once they got on base, especially Willy Taveras.  Surprisingly though, the Reds have remained fairly even-keeled with their approach to base stealing.  I only recall one or two situations where the stolen base attempt was completely inappropriate.  Unfortunately, (or fortunately depending on your perspective) the Reds have literally sacrificed the running game for another strategy.  They lead the NL in sacrifice hits with 26, including an incredible 15 by non-pitchers. 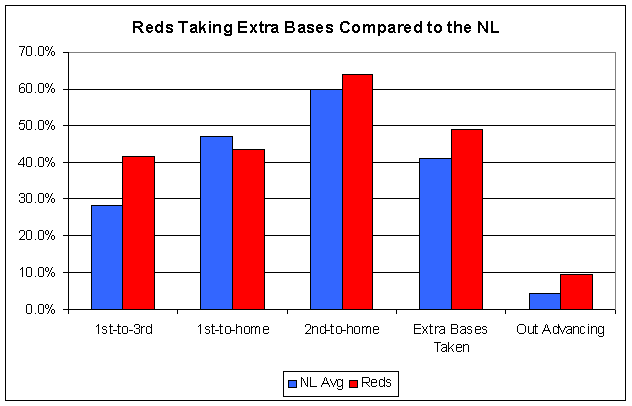 The Reds are doing an excellent job of moving from first to third on a single and scoring from 2nd base on a single, which has put them behind only Colorado when it comes to taking that extra base on a hit.  However, only the Brewers have made more outs trying to get that extra base, though they've done it many fewer attempts.  The Reds are running the bases hard, but they may not be running them as smart as they should be.  In fact, their 31 total outs made on the bases is the most in the NL, not a good sign for a team that is basically average at getting runners on base in the first place.

Individually, the best base runners on the team have been Jay Bruce, Joey Votto, and Taveras, who are all taking extra bases about 60% of the time they get the chance.  All three have also aggressively taken bases on flyballs and battery mistakes, with Votto's 5 advances good enough for 15th in the NL.  The worst base runner so far has been Brandon Phillips, who has taken an extra base just 40% time while making a team leading 6 outs on the base paths.  He made a couple of nice plays on the bases last night, but he still needs to step up his game a bit.

Honestly, I don't mind the Reds being aggressive on the bases up to a point, but I'd definitely like to see them be smarter about it.  They can't afford to give up those outs so easily and I especially hate to see already existing base runners erased.  In a surprising twist, though, I wouldn't mind seeing more stolen base attempts from the Reds, but only in lieu of all the bunt attempts, especially with Taveras on base.  Let the guy run, and let's stop wasting outs at the plate.  Sure, he'll fail at stealing occasionally, but a bunter almost always makes an out.  No reason to give them up that easily.