Bangarang!! Rufarroyo and the Lost Boys Dispatch Captain Hook and His Dastardly Pirates

Share All sharing options for: Bangarang!! Rufarroyo and the Lost Boys Dispatch Captain Hook and His Dastardly Pirates

Bronson Arroyo.  You know the story of how a team with no offense ends up squeaking out win after win with brilliant pitching?  They're making a documentary about it.  It stars this year's Cincinnati Reds.  Arroyo took his turn on the stage tonight, throwing 8 innings of 4-hit shutout baseball, sitting down 10 in a row in one stretch.  I cannot overstate how exhilarating it is to see our pitchers doing this so often. 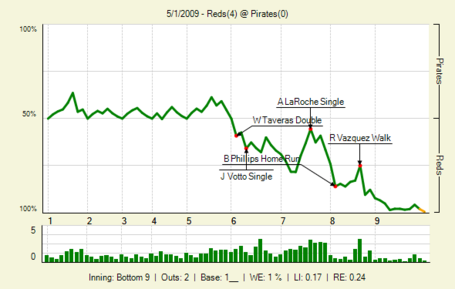