Game 2 Preview: Volquez tries to break the pace for an 0-162 season.

Share All sharing options for: Game 2 Preview: Volquez tries to break the pace for an 0-162 season.

Edinson Volquez makes his first trip out onto the GABP mound for the 2009 season and there is a great deal of anticipation from Reds fans to see what kind of pitcher he will be this year.  His ERA was over two runs higher in the second half compared the first half, mainly because he was getting hit much harder in the 2nd half (.436 SLG against compared to .292 in the first half). Personally, I think he'll be pretty damn good this year...if he can get control of his pitches.

The one issue that I see with Volquez's game is that he tends to be wild.  That leads him to high pitch counts and unwanted walks.  This wildness though is a factor of the movement on his pitches.  The good thing is that hitters have a hard time figuring out where his pitches are going.  The bad side of that is that sometimes so does Volquez.

I've been fiddling around today with the pitch flight graphs that Harry Pavlidis created, trying to see if I can what the pitches flight path might look like from the catcher's perspective.  Here are the average pitches for Volquez versus righties and lefties: 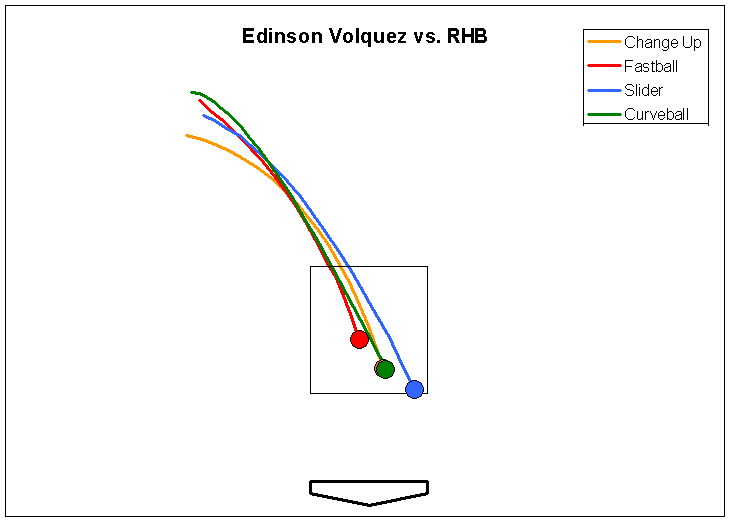 The surprising thing for me on these graphs is how different his release point is on the change up compared to his other pitchers. One would think that his pitch would be getting tipped based on that different in release point, especially for something like a change up that is supposed to look like a fastball.  Anybody have any theory on why that seems to work still?

After the jump we'll look at Mets starter Mike Pelfrey.

Pelfrey and Volquez faced off last July in Cincinnati, with the Mets winning 7-5 in 10 innings.  Pelfrey gave up 3 home runs in 7 innings - one each to Adam Dunn, Brandon Phillips, and Edwin Encarnacion.  Despite the fact that two righties hit home runs off him that day, Pelfrey tends to be much more effective against right-handers than left-handers.  In 2008, righties batted .245/.305/.349 against him, while lefties smacked him around to the tune of .307/.376/.439.  Hopefully tonight we'll see the benefit of having some quality left-handed hitters in the lineup.

Pelfrey is mainly a fastball, slider, change up pitcher, with a fastball that sits in the low-90s.  Last season he threw his fastball 81% of the time, so you pretty much know what you are getting when you come to the plate.  He's a ground ball pitcher - career 1.69 GB/FB ratio - who is most successful when he avoids the walks because he doesn't strike out many hitters - under 5 per 9 innings last year.  I wouldn't say he's a pitch-to-contact pitcher, but he's not afraid of the hitter making contact since he doesn't allow too many home runs.

As you'll see in the graphs below, he likes to work on the outer portion of the zone.  What surprises me about him is that he doesn't necessarily keep the ball down in the zone, odd for a pitcher who gets so many ground balls.

I don't have time to break down all of his pitches today, but here is how he generally pitches against lefties and righties: 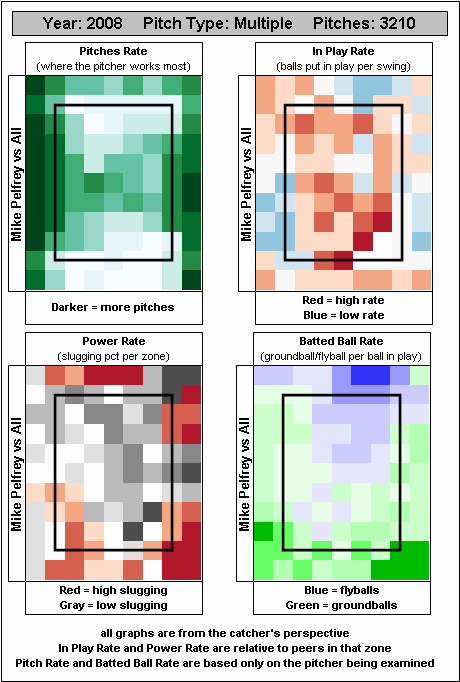 I think the Reds can get to this guy tonight. I'm looking for 5+ runs out of the offense and I think that should be plenty for Volquez. I'm predicting a Reds win in this one.