Today the Reds face off against perhaps the best left-handed pitcher in baseball, if not the best overall pitcher.  Johan Satana has been dominating opponents for 7 years now, putting up a 106-48 record with a 2.86 ERA since he became a regular starter with the Minnesota Twins back in 2002.  During that span, he's struck out 9.5 batters every nine innings while walking just over 2 batters per 9 innings pitched.  It's hard to find numbers from Santana that don't making him look dominate.  He does it all well.

But how does he do it?

He does it with 3 plus pitches that he weaves into a tapestry of zeroes on the scoreboard (I should be a sportswriter!).  Here's how those pitches broke down for Santana in 2008:

He uses his fastball to set up his other pitches, and while he used to throw it a couple miles an hour faster a year or two ago, he's still got some giddyup on it when he needs it.  His most devastating pitch though is is change up, consider by many to be one of the top 5 in the league.

This is what his three pitches look like.  I've broken them out versus right-handers and left-handers to show how much more Santana likes to work away from left-handers.  He'll bust in on the hands of righties from time to time, but he mainly stays away from the inner half of the plate against lefties. 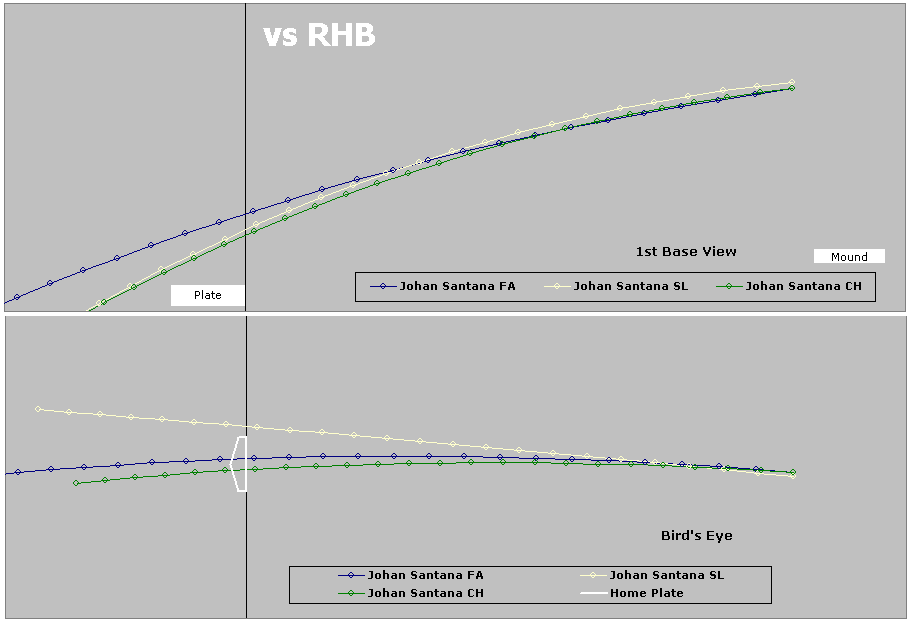 Click link to change view: vs RHB | vs LHB

After the jump, check out how Santana works the zone with each of his pitches. 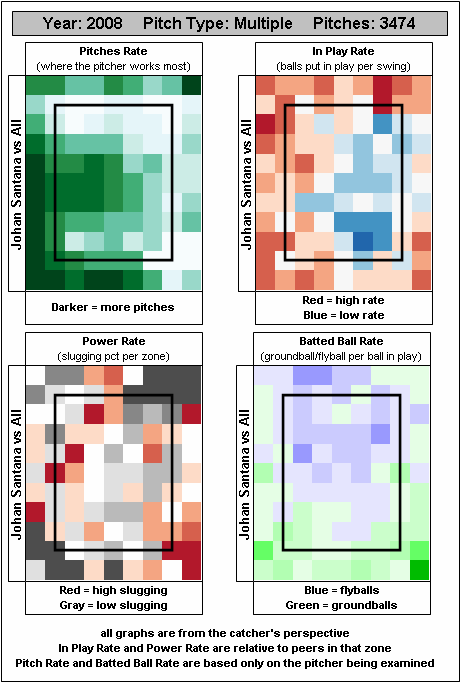 The number one thing that sticks out for me is that if you are a left-handed hitter, don't even worry about the inside of the plate.  He may come in there occasionally, but you are better off focusing on the outside half of the plate and trying to manage the pitchers there. Right-handed batters better just hope for the fastball.  If he throws you a change up or slider, you may get your bat on it, you may put it in play, but you aren't getting much after that.  The dude is a seriously dominant pitcher.  Thankfully the Reds only have to face him once or twice a season.