I know it's early, but I can't help but get excited about how the Reds are showing so much patience at the plate right now.  Despite batting just .222 on the season to this point, they are 8th in the NL with a .342 OBP, which is 21 points higher than their OBP from 2008.  I'm not sure if this is a new trend for the team or a small sample anomaly, but it definitely helps your team if you are still getting on base even you aren't hitting the ball well.

One player in particular that has surprised me so far is Brandon Phillips.  The Reds second baseman has already drawn 7 walks this season, a number than is nearly 20% of his 162 game average for his career.  Obviously 7 games is not a enough to really identify any new trends, but the data in general gives me hope that maybe Phillips is making some adjustments to his game.

The thing that I really like to see is that Phillips has managed to stay patient while pitchers refuse to throw him strikes.  He's still swinging out of the zone a little more than I'd like, but given that he's an aggressive hitter and that pitchers aren't throwing him strikes, I think it's a good sign that he has managed to not let his aggressiveness get the better of him so far.

This is the kind of hitter that I've been hoping Brandon Phillips would become.  I don't necessarily want him to stop being aggressive - he doesn't have to draw 100 walks a season - but I'd love for him to continue to lay off those pitches that he can't handle.  Specifically, if he can keep from chasing those low and away pitches, he will become a much more difficult hitter to get out.  So far, he's been doing that pretty well: 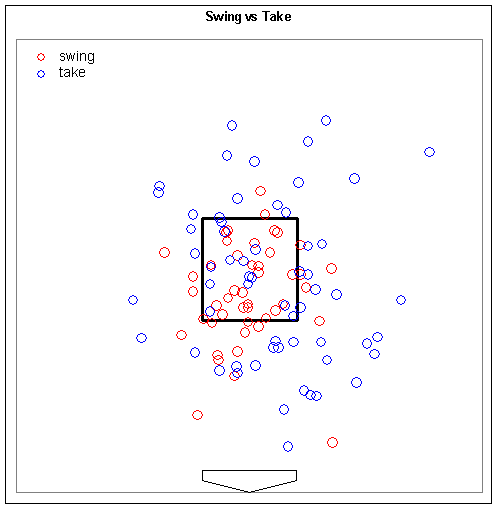