Share All sharing options for: Cancelled Game Thread: Rain out at GABP 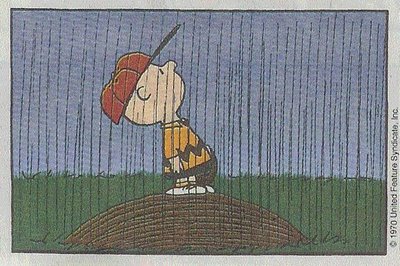 Johnny Cueto makes his first start of the 2009 season tonight, in conditions not too unlike the ones in which he made his first start of 2008. It's cool and rainy tonight. The only real difference is that last year it was a day game.

Cueto had arguably the best Spring Training of any Reds pitcher, if you include every outing. Micah Owings and Homer Baily each got rocked in Minor League appearances, Harang was inconsistent, and Volquez walked quite a few hitters during the Spring. Cueto, however, was very consistent. He only allowed more than 1 run in a start twice (3 runs once and 2 runs once) and he only walked more than 1 batter in a game once. If there was one thing to complain about it'd be the fact that he only managed 19 strikeouts in 34.2 innings. I hope that was only a function of Spring and not a new trend for Cueto, but I'm not going to complain too much since he walked very few hitters as well.

On the mound for the Pirates is 26-year old right-hander Jeff Karstens. Karstens was acquired as part of the Xavier Nady deal last season. He had some mild success with the Pirates in his short stint with the team last season, including a 7 hit, 4 run outing against the Reds on August 12th. Despite pitching fairly well - he had a couple of bad outings mixed with a couple of solid ones - that loss to the Reds started a string of 6 straight losses for Karstens, as he finished the season with a 2-6 record.

I think Karstens is somebody off whom the Reds should be able to score some runs. He's got pretty good control, but he's also fairly hittable. This is probably a pitcher where the Reds can come hacking a bit, since he's typically around the plate. Obviously they want to wait for their pitch, but unless he's proving to be uncharacteristically wild, I wouldn't suggest waiting for him to put you on base like the Mets were doing.

I'm looking forward to seeing Cueto pitch tonight. I have a strong feeling that this is going to be a big year for him. I hope he proves me right.