Big day of games yesterday. (I would've updated last night, but I was flying to Michigan.) One big upset,  couple minor ones. You guys know the scores, but I'll recap after the break. 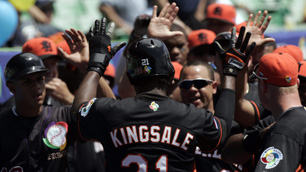 China defies some (read:my) expectations by defeating rivals Chinese Taipei, and sending them home. Both pitchers looked a little shaky at first, but China's Lu Jiangang settled in nicely, pitching 5 1/3 innings on four hits and only one run. Ray Chang was the hero in the Chinese lineup, hitting 3-4 with 2 RBI, including a double and a solo homer. The Taiwanese never really got anything going, I think in part due to their own overexcitement.

Ouch. Mercy-rule'd. Korea's pitching, to say the least, did not come through, Starter Kim Kwang-Hyun got chased early after giving up 8 runs in 1 1/3 innings. Matsuzaka, for Japan on the otherhand, looked weak in the first inning, giving up a 2-run homer in the first inning to Kim Tae-Kyun, but managed to pitch 3 more innings without giving up another run, and the rest of the Japanese followed suit, with Watanabe, Suguichi, and Iwata all pitching hitless innings. The best thing about Korea's pitching was Lee Jae-Woo's admirable rec-specs. Ichiro had a nice game after his lackluster pre-tournament performance, going 3-5, scoring 3 runs, plus a stolen base and an outfield assist. Murata Shuichi hit his second home run of the classic, batting in three runs in the process. Also, shorttop Nakajima Hiroyuki added 2 doubles on a 3-4 day. And thus, Japan becomes the first team in 2009 to automatically qualify for Round 2, but they'll face the winner of Korea v. China.

Korea did not have as much trouble with this less-formidable opponent, eliminating China in a mercy-ruled shutout. In fact, China had only 2 hits in the game, and they never walked. Korea got a great start from Yoon Suk-Min who pitched 6 innings, gave up two hits, and struck out four. The Koreans got offensive contributions up and down the lineup, highlighted by five run innings in both the 5th and the 6th. Korea will now rematch with Japan.

This game was mostly covered in the 'game thread', so I won't say too much. Clearly both teams played alright. Neither Johnson nor Peavy had a great start, but both were pitching against some advanced batting. on the US side, both Brian McCann and Adam Dunn hit two run homers. (Adam Dunn's batting average is sitting a 1, since he walked in each of his other 2 plate appearances). Our Joey Votto also had a great day, going 4-5 and hitting a home run for Canada.

Not unexpected. Mark DeFelice had a pretty good start for Italy, going 4 scoreless innings. Then Jason Grilli brought his weak shit to the table, allowing three run, including a HR from former Tigers teammate Carlos Guillen, while only getting one out. Jose Lopez had a great day at the plate, hitting 3-3 with two doubles. Carlos Silva started for the Venezuelans, and sort of impressively did not give up a run, with six hits and a walk in four innings. Felix Hernandez took over for another four innings, giving up one hit, and one walk and striking out 4.

Holy crap! This game had its own game thread as well, but....wow. Talk about defense losing you games - Edinson's start wasn't impeccable, but none of his three runs were earned, stemming instead from fielding errors. They were the only runs the Dutch scored, but they were enough to win. Pedro Martinez and Carlos Marmol both had impressive performances in relief, but without run support, it was fairly hopeless.

Another unsurprising result. Javier Vasquez had a good start for Puerto Rico, pitching 4 1/3 scoreless innings. Offensively, Ivan Rodriguez had an amazing game, hitting 4-4, with a double and 2 homeruns

Part of the strangeness of the new double elimination format is the sheer number of times teams can play each other. However, I don't think this is a true double eliminination tournament (where if Korea wins, they play another game to determine the winner of Pool A). Still, these teams could theoretically play each other another two times (Ok, so not a lot more than the 3 times they met in the 2006 classic). In any case, both teams have qualified, and at this point they're just fighting for seeding - and national pride. Clearly, Japan played a much superior game in their last matchup, but that could change. I'll give Japan a definite edge here, as I was impressed, watching them yesterday morning, but anything could happen. I can't currently find pitching matchups - Iwakuma is a good bet for Japan as he hasn't pitched yet, and is coming off a really fantastic 2008 NPB season. Korea will probably go back to Ryu Hyun-Jin if he's available by the rules.

Well, I'd like to say that if the Netherlands beat DR, then South Africa can upset Cuba, and of course it's possible, it's just really really really unlikely, still. MLB.com is calling probable pitchers Barry Armitage for South Africa and Norge Vera for Cuba. You will recall Barry Armitage as "the dude who once pitched an mlb exhibition game" and Vera as one of the top pitchers in Cuba for the last ten years. Hmm.

This is way closer than South Africa and Cuba, at least, but this game is Mexico's to lose. Australia's offense has actually been looing pretty good in its exhibition games - but their pitching is woeful. Full of woe. Plus, Mexico has serious homefield advantage.

An interesting game, where the winners will get a berth in Round 2. United States still has the advantage, here - likely with pitching, as Roy Oswalt starts for the US. I can't find a definite on the Venezuelan starter, but since Silva and Hernandez are out on pitch counts from yesterday, I think Armando Galarraga has the most major league experience on the Venezuelan roster, but we might see some Ramon Ramirez as well.

Unlike in Pool C, these teams are facing elimination, and you would think that the Dominican bats would wake up in the face of embarrassment, and also Panamanian pitching. Ramiro Mendoza will start for Panama. Mendoza, who won world series rings with the Yankees and the Redsox, signed a minor league contract with the Brewers, but failed a physical when he got to spring training.