Is it true that if Edwin keeps pulling it he might go blind?

Share All sharing options for: Is it true that if Edwin keeps pulling it he might go blind?

When I started writing this article last week, I was working under the assumption that Edwin Encarnacion was trying to pull the ball too much and this was a bad thing.  I think you'll see that it is fairly obvious that Encarnacion is a pull hitter, but I'm not so sure that it is totally a bad thing, though there is at least one area for improvement.  More on that in a bit..

First, I want to look at some comparisons between EdE and a couple of hitters on the Reds that use much more of the field.  Below you'll see a spray chart for EdE on pitches over the middle third of the plate.  There are also links to see spray charts for Brandon Phillips and Joey Votto, broken out by two different zones on the plate.  Click those links to change the images. 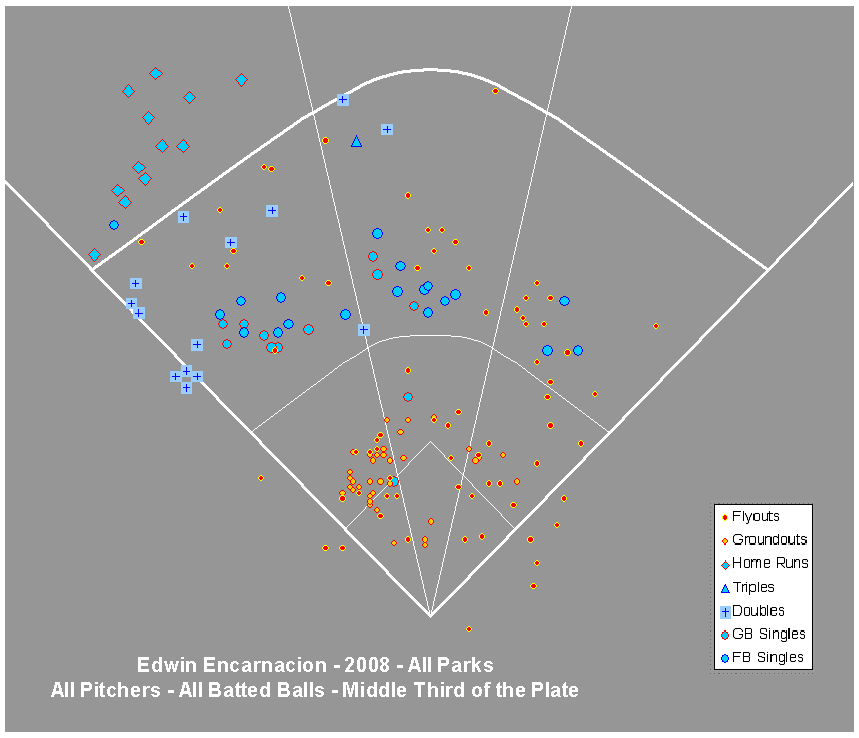 When you look at these graphs, keep in mind that EdE and BP are right-handed and Votto is left-handed.  That can be confusing since both Phillips and Votto frequently go the other way with the outside pitch while EdE likes to pull that pitch.  But here's the thing, it seems to work pretty well for him.  When Phillips or Votto try to pull that outside pitch, they hit it on the ground, usually right to an infielder.  However, when Edwin pulls that pitch, he manages to get it to the outfield quite a bit, often times turning it into an extra-base hit.  I guess what I'm saying is that different approaches work for different players.

The big concern from these graphs for me is the number of infield pop ups that EdE has on pitches over the heart of the plate.  I'm not sure if this is because of his pull tendency of because of his desire to hit the ball real far, but I sure hope he gets it figured out this season.

I do have some other causes for concern with Edwin's approach.  Read more to find out where I think he should change.

Encarnacion really likes the ball on the outside half of the plate.  This is partly why he able to pull it so well.  His hotzone graph makes me believe that he may even be looking for pitches out there to pull. 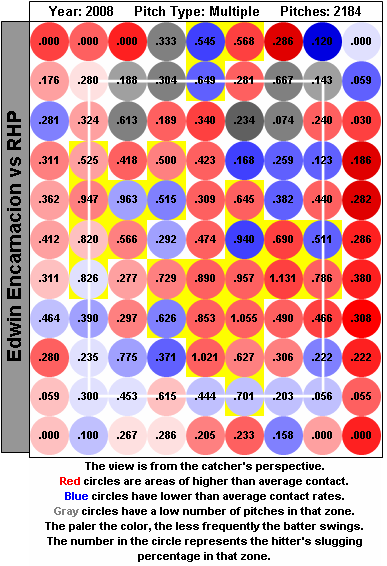 The dark colors on the right-side of the graph show that EdE swings quite a bit at those pitches on the outside third of the plate.  The frequency of the red color also tells us that he makes pretty good contact on those pitches.  The highlighted yellow area tells us that he particularly likes pitches on the lower portion of the strike zone since he seems to have a lot of power in that zone.

But there are two things that concern me about this graph.  First, it seems to me that Edwin gets beat a lot on pitches that are just outside of his power zone.  In my limited experience with this graph, I don't recall seeing a hitter that had so many weak spots immediately surrounding his power zone.  In particular, it seems like Edwin's power goes from his chest and down and away to the lower outside of the plate.  Could this mean that his swing leaves his bat at an angle too frequently?  I'm just hypothesizing here, and without seeing actual video, we can't really tell for sure, but it seems like he is probably putting himself in a position where he can't get to that higher pitch the farther it goes away from him.  Could this be a result of him trying to lift the ball more to hit more home runs?  Any scouts out there with a keen eye on this one?

The other thing that concerns me is the amount of swinging Encarnacion does on pitches that are an inch and a half or more off of the plate.  It's particularly concerning because he doesn't do a whole lot with those pitches, even though he makes quite a bit of contact on them.  This could be an area where his pull tendencies are hurting him.  Here is his spray chart on those pitches: 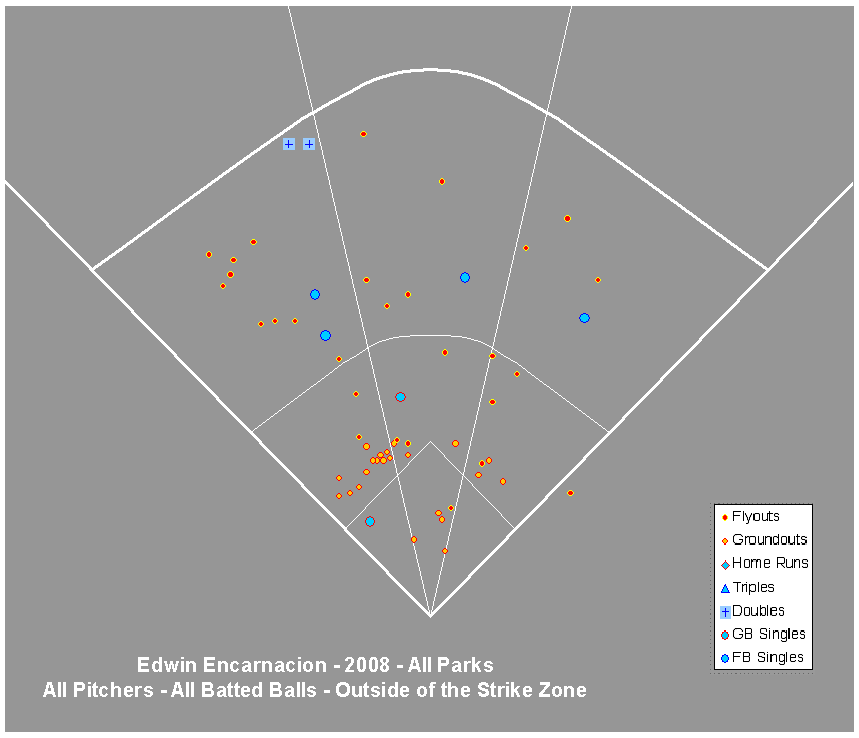 Now we see a lot of Edwin's pulled pitches being hit on the ground.  Either he needs to learn to lay off these pitches - the ideal scenario - or he should try going with the pitch a lot more. Trying to pull those way outside pitches isn't doing him any good.

I know it's not easy to change a swing while a pitch is on its way to the plate, but if EdE wants to continue to develop as a hitter, he's going to need to add a little more variety to his approach, I believe.