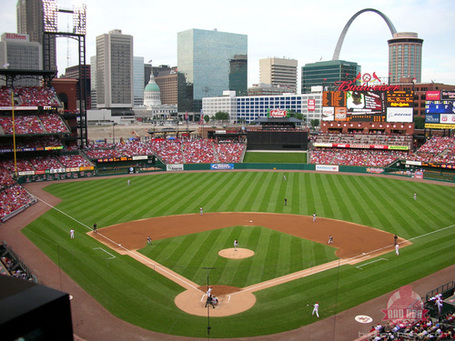 Busch Stadium in St. Louis. The arch overlooks the field making for one of the greatest views in sports. Unfortunately for Cardinal fans, a nice view might be about all they have to look forward to this year if the starting rotation continues to be plagued by injuries.

Notes Of Interest on the Team:

10 World Championships, the most recent being their 2006 victory over the Detroit Tigers

Former Reds on the team:

(Note- projections are based by averaging different projection systems)

The strength of the Cardinals rotation depends almost solely on the health and performance of Carpenter. In his most recent outing, Carpenter threw 48 pitches. If Carpenter is not able to stay healthy, the Cardinals have a few options waiting in the wings in 25-year old Mitchell Boggs and 24-year old Kyle McClellan or Anthony Reyes, who was demoted during last season after several struggles. Wainwright and Lohse will also play key parts in the rotation. If the two can emulate the seasons they had last year (combining for a record of 26-9), the Cardinals may be able to get away without needing to use Carpenter as a starter and possibly delegating him to a relief role.

Last year, the Cardinals bullpen led the major leagues in losses as well as blown saves- in case you didn't know... that's not good.

The role of closer has has still not been announced for the Cardinals yet. As of now, there are four major candidates for the role, which may or may not be closer by committee by the time the season starts. The candidates are as follows:

Chris Perez- A 23-year old right-hander who had 7 saves last year with an ERA of 3.46. His strikeout to walk ration is nearly 2:1, and he is the current favorite for the job. His inexperience is the biggest negative the Cardinals have.

Jason Motte- Motte has had even less experience, but allowed only one earned run over 12 outings last year, and has posted numbers comparable to those of Perez.

Josh Kinney or Ryan Franklin- Even if either of these guys gets the job out of Spring Training, I can't see them keeping it throughout the whole year. Franklin closed for a good portion of last year and was only 17-25 in save chances, while Kinney has missed much of the past two seasons and has undergone reconstructive elbow surgery. Ultimately, I think Perez will get the job.

Duh... Baseball's best playing here. Albert Pujols hit 37 HR last year, driving in 122 RBI and hitting .357 on his way to winning his 2nd MVP. The "28" year old first baseman is projected to hit 37 HR again this year and hit .330, while driving in 114 runs. The biggest question for Pujols will be health. He struggled with an oblique injury last year at times, and a prolonged injury to Pujols, who made almost $14 million last year, would deal a huge blow to the Cardinals offense and defensive.

As of now, this is probably the biggest question for the Cardinals. The Cardinals seem desperate. They've even gone so far as to try out longtime outfielder Skip Schumaker at the position.  As of now the job is pretty open. Between Schumaker, veteran infielder Joe Thurston, and Brendan Ryan, a platoon will probably be set up. The best possibility I can see for the Cards is to use a platoon between the left-handed hitting Schumaker and the right hander Ryan. However, depending on how he continues to perform, Thurston may platoon with Ryan. Ryan is the only one I can really feel safe saying that he'll get some playing time at second.

Troy Glaus will still probably be out until mid-April after undergoing shoulder surgery,  Joe Mather seems to be the man for the job. Third Base prospects David Freese and Brett Wallace have both been reassigned to their respective minor league camps leaving the job open for Mather- at least until Glaus returns. Mather is 25 and has played in only 54 games- all last year. In 133 AB, he hit .241 with 8 HR and 18 RBI. Mather has the ability to play several positions, and this distinction as a utility player could help to keep him on the roster after Glaus' return.

Khalil Greene looks to be the front runner for shortstop right now. Last year, Greene appeared in 105 games for the Padres posting a .260 average and hitting only 10 HR- a significant drop from his 2007 total of 27 long balls. Other possibilities include prospect Tyler Greene and 2007 acquisition Brian Barden.

Yadier Molina is still the clear front runner here. Molina's offensive production has been increasing the last couple of years and he managed to hit .304 last year in 124 games. Last year Molina won the NL Gold Glove and is generally renowned for his strong arm and good glove. As of now, his backup looks to be former Red Jason LaRue. LaRue has played in both Kansas City and St. Louis since parting ways with the Reds after 2006 and appeared in 61 games for the Cardinals last year.

The outfield is pretty well set for the Cardinals. All-Star Ryan Ludwick will play right, Failed pitcher turned outfield strongarm Rick Ankiel will take center and Dave Duncan's son Chris will play left. The odd man out in this situation seems to be the Cardinals top prospect Colby Rasmus. Rasmus will probably be the team's 4th outfielder and in the case that Ludwick can't match his sudden increase in power and talent from last year, we could see him playing right field or see Ankiel moved to right and Rasmus put in center before too long. Scott Schumaker who may be played at second base can also play outfield for the team.

I can't see the Cardinals beating out the Cubs or the Brewers with the troubles we should see from the bullpen and the holes we see in the infield. The Cardinals, Astros, and who knows... maybe the Reds should battle for third place throughout the season.