What is the ideal defensive alignment for the Reds?

Share All sharing options for: What is the ideal defensive alignment for the Reds? 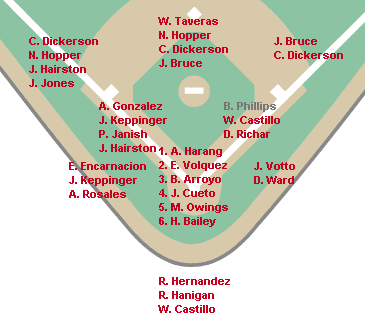 Barring any surprise signing, it looks like we know who will be competing in Spring Training to make the roster.  And, for all intents and purposes, we know who will be playing what positions when the season starts as well, but that's not necessarily how it should be.  Or should it?

Today let's take a look at where we think each player should be playing when the season starts.  Let's assume that Votto, Phillips, EdE, Taveras, and Bruce all have starting jobs, though where they play is entirely up to you.  Use the remaining players to set up your ideal defensive alignment for the current roster.  If you think EdE should be playing 2B and Phillips in LF, let's hear why.

Personally, I think the Reds could be much better defensively than they are going to be with just a couple of changes.  There is also the issue of the long-term positions for certain players.  Does it make sense now to move players around in anticipation of opening spaces for prospects?  What do you think?