Share All sharing options for: 5 Things That Could Make the Reds Interesting out of Spring Training 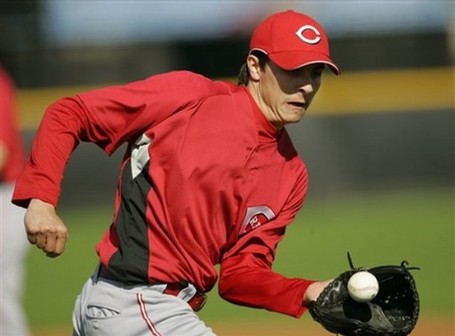 These are five things that, if they happen, could point to the Reds being something better than we expect them to be at this time, maybe even in serious contention for the playoffs:

1. Homer Bailey wins the 5th starter spot on his own merit.

Micah Owings has shown to be a pretty good pitcher, and would be a pretty good fifth starter if he wins it.  But if Homer Bailey can put together a Spring like Johny Cueto had in 2008 and make it known that he is ready for the big leagues, this pitching staff could be very formidable.  If Homer can finally harness that potential and turn it into something special, who knows what this team could do?
Alternative Positive Outcome: Micah Owings kicks ass on the mound and at the plate.

If the Reds are going to be successful this year, shortstop cannot be the hole that it was last year.  If Gonzalez's knee is healthy enough to actually flash some leather at the position, it will be a huge step up for the defense compared to 2008.  If Jeff Keppinger is healthy enough to be a solid right-handed bat off the bench and utility infielder, then the bench may actually become a positive instead of the gaping hole it's been the last couple of years.
Alternative Positive Outcome: Chris Valaika plays so well in Spring, the Reds name him the Opening Day shortstop.

The Reds options for left-field are basically uninteresting.  You've got a couple of guys who may be washed up, a couple of guys who have never been anything special, and Dickerson, a guy with a lot of skill, but not a lot past success.  If Dickerson can manage to crush right-handers like he did all of 2008, and if the Reds can find a suitable right-handed bat to play the other side of the platoon, left field may not be as bad as it currently looks.  This is probably asking too much, but with a talented player like Dickerson entering his prime age, maybe, just maybe he might put it all together for a year or two.
Alternative Positive Outcome: Jonny Gomes and Jacque Jones prove they have enough left to make a quality platoon in LF.

4. Edwin Encarnacion convinces Dusty Baker than he can be Tony Perez in the middle of the lineup.

I've been criticized by the old-schoolers on this site for even considering the idea that EdE might be a Tony Perez-like bat for the Reds.  Well, here I go again.  Encarnacion has already acknowledged that he was a little homer happy last year - a fact that is evident in his increasing fly-ball rate and decreasing line drive rate.  If EdE can get back to his line drive ways of 2006, I really think he can become a 100 RBI guy with regularity.  He's got a lot of similarities to Perez's offensive game in him.  Hopefully his coaches can help get it out of him.
Alternative Positive Outcome: Brandon Phillips learns to lay off the low and away breaking ball, adding the much needed on base skill to his repertoire.

5. Jared Burton and Bill Bray prove that they can shut down teams in the 7th and 8th innings, solidifying the bullpen for good.

Jared Burton has already shown he can handle this role.  Last season he pitched in 21 games where he came in to the game in the 8th inning or later with a score that was within 3 runs.  In those 21 games, he pitched 21 innings, struck out 20 batters, and posted an ERA of 1.21.  He allowed a few too many base runners though (1.35 WHIP).  If he can cut those down, he'll be the shutdown guy that we need.  Bray, however, did not have as much success in those situations (4.11 ERA in 15.1 IP).  It's time for Bray to prove to Dusty that he's more than a LOOGY.  He's got the talent to do what Burton does, now he just needs to put it together.
Alternative Positive Outcome: Josh Roenicke wins a roster spot as a 6th or 7th inning rally stopper.