Pitchers and catchers reported yesterday and everyone but Humberto Cota showed up on time.  Cota is on his way from his home in Mexico and should arrive soon enough.  the writers have been off just as long as the players, and they seem like they are more excited about the start of camp than anyone else.  here's a few of the more interesting things from the first day: 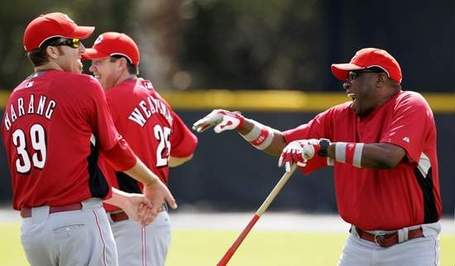 We talked about it yesterday, but I wanted the put the picture on the main page (thanks be to bubbafan for first posting it).  Aaron Harang blasted his delts with the Zone diet and is secretly hoping the weather in Florida hits a cold snap before camp is over.  You see, he packed all these new sweaters to show off his new bod and he would look downright silly wearing them in 70-degree weather.  Lookin' good Harangatang!

Homer Bailey came into camp a few pounds lighter as well, having lost 10 pounds this winter.  He was pretty svelt as it was, but he says he feels better than he's ever felt.  For what it's worth, Dusty has all the confidence in the world in him.  Here's a quote:

“Hope put the big name in camp on him because he happens to be a No. 1 draft choice (2004),” said Baker. “Here’s the ball, Homer. I’m not going to put any pressure on him other than what he puts on himself. I’m pulling for him, big-time. He is one of the guys in the mix.

“He’s had some opportunity, but he is still so young,” Baker added. “He’s not close to having his opportunities exhausted. He’s 22. We’ve just heard about him forever. You’d think he was 30 years old. We’ll keep trying to instruct him. The ball is in his hand.”

And this note from the Fay:  "Edinson Volquez said he's pitching for the Dominican in the World Baseball Classic, but Johnny Cueto is not."  This is probably for the best.  Cueto pitched a good deal last winter in the DWL, and then went on to throw more innings than he ever has in a season in his first year in the majors.  And then he threw some in the DWL again this year.  Probably a good thing he won't be pitching in a major international competition this spring.

Fay also spoke with Bronson Arroyo, who seems like he always has something to say:

“You always come into camp optimistic. But I figure after ’06 coming to ’07, I thought we had a pretty good club and he didn’t do anything. I’m not going to make any predictions on anybody else’s behalf but mine.”

“I’m definitely happy with our defense. I honestly think our pitching staff is more solid than it’s ever been. It’s going to come down to being able to score some runs. If we can put runs on the board, I don’t see how we can’t at least compete.”  “It’s more risky this year than ever because of the eight guys who are hitting in the lineup a good amount of them haven’t really proved themselves in the major leagues.”

As for Arroyo's prediction on Arroyo: "I feel like I’ll throw 200 innings and hopefully win 15 games.”

I think you can count Bronson as one who is happy to have anyone but Adam Dunn playing left field.