Inspired by this post on Beyond The Box Score, I've been playing around with spray charts for different Reds players and I noticed an interesting comparison between Brandon Phillips in 2008 versus 2007.  Check it out:

They are kind of hard to read, but you can see a larger version by clicking on the image, or after the jump I'll post a larger image that will allow you to switch back and forth between the two.

I don't have any solid proof, but  I have a suspicion that this is all because BP tried to become a power hitter in 2008, rather than just trying to hit line drives and letting the home runs come as they might.  Of course, there is also a bit of luck involved.  In 2007, BP really only had 2 warning track outs at GABP, but in 2008, that number jumped to 7.  Different conditions on those days and maybe these two graphs get swapped.  Either way, I think it is prudent for Phillips to avoid trying to be a pull hitter and try to use the entire field.  He had more success that way in 2007 and maybe he can recreate that in 2009. 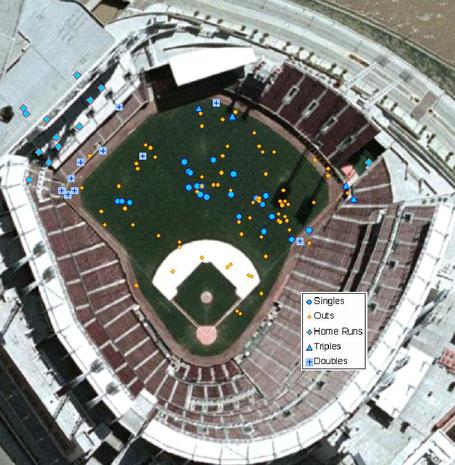