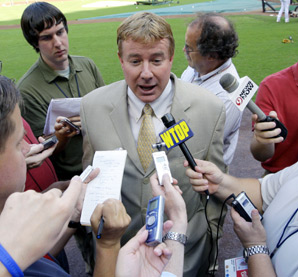 Who is Gossip GM?  I'll never tell!
via i2.cdn.turner.com

The Winter Meetings in Indy end tomorrow with the Rule V draft.  Here's a recap the deals and other news that broke yesterday, much of which was disussed in yesterday's open thread:

- Walt Jocketty had some discussions with the Rangers about "a hitter, shortstop depth and pitching depth." but nothing sounds close.  Walt and Jonny Gomes' agent are "still a ways apart."   Shortstop is still an area of interest, but it's no surprise that Jocketty thinks Miguel Tejada or Orlando Cabrera are poor fits for the Reds' "pay structure" (this rumor was floated by Jim Bowden).  And rest easy, RijoSaboCaseyWKRP - the Reds have not reached out to Jamey Carroll (his agent, Cincinnati-based Jonathan Maurer, confirmed).

- And speaking of Bowden, Washington signed Pudge Rodriguezto a two-year deal.  The final piece!  Bowden is of course no longer the Nationals' GM, making this one of the first winter meetings he hasn't attended as a GM in some time.  Which means no sartorial controversies and no arm-wrestling contests gone awry.

- The Yankees, Tigers and Diamondbacks had an old-fashioned three-way that saw Curtis Granderson go to to the Yankees and Edwin Jackson head to Arizona.  There are some promising young players in the deal as well - Arizona trades Max Scherzer to Detroit, and New York sends Austin Jackson and Ian Kennedy to Detroit and Arizona, respectively.  New York is definitely capitalizing on its ability to absorb salary (from a team looking to shed it) to add a very solid up-the-middle player near his peak.  Dave Cameron gives an "A+" to NYY.

- Brad Penny signed a one-year, $7.5M deal with St. Louis.  He's a big guy without a great health track record, but when you already have two Cy Young candidates and another decent starter, gambling on the upside of a hard-thrower like Penny isn't a bad idea.  Meanwhile, St. Louis continues to talk with Scott Boras about Matt Holliday, who is still presumably recovering from that ball striking his groin.

- Peter Gammons is jumping from ESPN to MLB Network.  In my first job out of college there was a girl in my training class with the last name Gammons who had Mass. plates on her car.  I asked her if she was related to Peter Gammons; she answered she was not.  Somehow the relationship failed to blossom from there.

- What would you guess Albert Pujols makes in endorsements?  Derek Jeter?