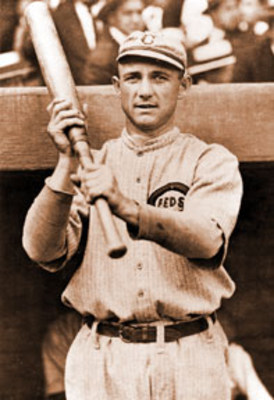 Early in the 1913 season, the Reds traded Art Fromme—a veteran pitcher who had about 250 innings left in his arm—for a package of three players and cash. The highlight of the deal for the Reds was almost certainly pitcher Red Ames, who was in his early 30’s and had already strung together many very good seasons. In the end, however, Ames was an afterthought and the 23 year old second baseman with the funny name became the lasting value. Groh played a season or two as a second sacker, and then made the permanent switch across the diamond to third base, where he became the league’s preeminent defender. Groh led the league’s 3rd basemen in fielding percentage five times—often besting league averages by 20-30 percentage points, in double plays six times, and in putouts three times.

The leadoff-hitting Groh was no slouch at the plate, either. As the Reds ramped up towards their eventual World Champion team in 1919, Groh made a strong case as the best leadoff hitter in the National League, typically flirting with a .400 on-base percentage during his prime, and adding a strong number of doubles (peaking at 39 in 1917). Despite weighing less than 160 pounds, Groh was famous for using a heavy "bottle bat", which had a thin handle and a very thick barrel, and was known for his masterful bunting skills. In 1919, his third straight season with OPS+ marks over 140, Groh led the league in OPS with a 310/392/431 line, and confidently led his team into the Series. Ironically, given the efforts by the Black Sox to lose and Groh’s place as the best hitter in the league, he struggled during the series, hitting just .172 with only two doubles in 29 at-bats.

Prior to the 1921 season, a long contract dispute ended with Groh accepting a less-than-desired salary, on the condition that he be traded immediately to the Giants. Commissioner Landis nixed the deal, saying Groh had to play out the ’21 season in Cincy, but after the year was over, he was finally traded for a couple of players and $150K in cash. Cumulatively, Groh’s nine seasons in Cincy were rather remarkable: a total OPS+ of 130, and only one season under 120.