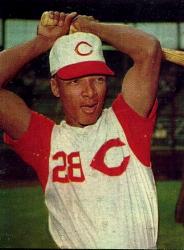 In the market for a sure-fire bar bet that you can spring on your fellow Reds fan? Ask him/her to name the only player who ranks in the franchise’s all-time top ten in doubles, triples, and home runs. Pinson was signed by the Reds out of high school at the age of 17. Pinson was a product of Oakland’s famous McClymonds High School, where he was teammates of Frank Robinson and Curt Flood. In fact, the Reds signed both Flood and Pinson out of high school prior to the start of the 1956 season. It was a compeition of sorts: both were talented outfielders who ultimately were to play center field in the majors. Flood won the battle, but lost the war: he made his MLB debut in that 1956 season at age 18 after having destroyed his Class B competition. Pinson, started his career one level down, but quickly made his way up as well: debuted in 1958, and handed the full time CF job in 1959, by which point Flood had been traded to the Cardinals where he had a lesser, but perhaps more impactful, career.

Pinson’s rookie season was one for the ages, leading the league in runs (131) and doubles (47), and rapping out over 200 hits. In 1961, his overall offensive production was similar, but he hit a definitive peak with the glove, recording 19 assists from center field and reaching more fly balls than most. A couple years later, he had his greatest season with the bat (with a 142 OPS+) by virtue of his .313 average, 37 doubles, 14 triples, and 22 home runs. At the end of that 1963 season, Pinson was just 25 years old, but had already had over 1,000 hits and 100 home runs. His cumulative slash line to that point was 309/355/492 (125 OPS+), and despite the low offense environment of the time Pinson’s Brock2 projection for the remainder of his career would have predicted 3,700 hits, 650 doubles and almost 400 home runs. That, obviously, would be in the category of the all-time greats. Instead, Pinson is somewhat of an afterthought in the great hitters of the 1960s. It’s not like Pinson became a bad player; he played five more seasons with the Reds after 1963, and hit for a 111 OPS+ while continuing to roam center field.

There aren’t many statistical clues for the reason for the decline, but I wonder if there was a loss of speed in 1964 for some reason (just 8 SB that year compared to an annual average of 26), and perhaps there were just enough missed infield hits or gap doubles to make a significant impact. The steals came back for the most part, but then the power started to wane, and he never really learned to take many walks. Lots of questions, few answers—although the simplest one remains: some players happen to peak early. After a 1968 season that saw Pinson hit just five homers, the Reds traded him to the Cardinals for Wayne Granger and Bobby Tolan, both of whom had brief periods of excellence in the years to follow. Pinson continued to decline, bounced around with several teams, and ended his career as a .223 hitter for the Royals in 1975 while the Big Red Machine finally emerged victorious.