Share All sharing options for: Sabermetric Review of the 2009 Reds, Part 4: Pitching

To recap thus far, 2009 saw the offense drop considerably, the fielding improve dramatically, with a net effect being that the 2009 position players were probably at least as good, if not slightly better than the 2008 Reds squad of position players.

What about the 2009 pitchers?  Since the fate of a pitcher in the boxscore is directly tied to the fielders playing behind him, we need to adjust for fielders.  Here are three ways of doing that, and how the last several years of Reds pitchers have fared using each approach: 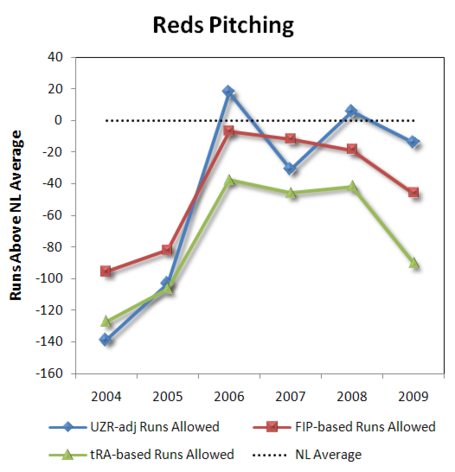 Here's what is shown above:

As you can see, the UZR-adjusted number is more volatile, which makes sense given that it's based on actual runs allowed and thus is subject to all kinds of "luck" (not to mention the volatility of a fielding stat!).  The FIP and tRA stats, on the other hand, basically parallel each other, with pRAA being consistently more negative about the team than FIP.  These two stats do largely the same thing (though with somewhat different input data and methods), and in my experience are usually within spitting distance of each other.  So while I'm not surprised to see them running parallel, I am surprised to see such a large quantitative difference between them in RAA.  It seems to me, at least over the last four years, that the "real" data (UZR-adjusted runs allowed) have more closely matched FIP, which makes me more inclined to believe FIP.  Maybe pRAA is using the wrong baseline (I'm comparing to all NL pitchers), or is more severe in its park adjustments?  (fwiw, while I still like tRA, I am much less enamored with it--and much less ready to ditch FIP--than I was, say, 6 months ago.  This is just the latest reason).

Anyway, looking at each line individually, you can see that all three statistics point to the same thing: pitching fell off a bit this year.  And, if you look at just the FIP or tRA lines, it was in its worst state since Bronson Arroyo's arrival in 2006.  What happened?  Obviously, the Volquez injury was huge.  But that's not the only story here.  Player by player breakdowns below the jump.

The table is sortable if you click in the header.

Notes on table: pLI is an indication of the leverage of the situations in which a pitcher pitched.  pLI = 1 on average, pLI=2 when situations are twice as influential on game outcome as usual, pLI=0.5 when situations are half as influential on game outcome as usual.  FIP is Fielding Independent Runs, with park adjustments for each coefficient (see above).  WARra is Wins Above Replacement based on actual runs charged to a pitcher (park adjusted).  It is calculated following Tango's methods, including the leverage adjustment.  WARfip is WAR based on FIP.  WARhit is an overall hitting assessment, which will be different from the last post because I discovered I was using much too low of a position adjustment for pitchers (sorry!).  WAR is the sum of WARfip and WARhit.

Bronson Arroyo had the best season of the group based on traditional stats, and is our official 2009 Reds Pitcher of the Year.  Clearly, he's the only one who topped 200 innings, and that has a lot of value in and of itself.  Harang, in contrast, seemingly had another sub-par season, at least by his standards.  This was especially true with respect to durability: thanks to his appendix, he only reached 162 innings this season, his lowest total since 2004.

But as Slyde showed recently, the major driving factor behind the differences in these two pitchers was actually some combination of fielding and luck: Harang's batted balls became hits 34% of the time compared to just 27% with Arroyo.  In fact, if you look at his peripherals, Harang had a better strikeout rate (by a lot), a better walk rate, and an equivalent home run allowed rate (with identical HR/F rates) to Arroyo.  Based on this, and despite his much lower innings total, Harang comes in as the more valuable pitcher this year...by a full win...over Arroyo!

I'm actually a bit concerned about Arroyo.  His strikeout rate dropped considerably this year.  Although he was improved in the second half, my pet belief is that Arroyo's success depends largely on his strikeout rate.  Then again, he's shown large fluctuations in strikeout rate in the past, so hopefully this is just a blip.  The Reds need him to be a 2-win pitcher next year if they're going to do anything.

Johnny Cueto had by most accounts a very successful season.  He started strong, but seemed to taper off as the season wore on, perhaps due to workload: he pitched in both winterball and the WBC last winter, which is far too many innings for my comfort.  I'd like to see him get back into the 8+ k/9 range where he was in 2008--if he does, he could be a force.

Homer Bailey had a heck of a turnaround season.  Citing some changes in his delivery that occurred during the offseason, Bailey started slow, but then something seemed to just "click."  The result was a tremendously successful final few months of the season.  I still don't know if what we saw was real or not, but I sure hope it was. Given his playing time, he probably has the biggest error bars around his projection of any pitcher on this team, and perhaps across the entire league.

Micah Owings has probably the most interesting row on the list.  As a pitcher, he wasn't very impressive.  Low strikeout rate, VERY high walk rate, and low ground ball rates do not tend to lead to success.  But the amazing thing is that he was able to couple that replacement-level pitching performance with hitting that clocks in right at league average.  The result?  A 1 WAR pitcher.  You can do worse from your #5 starter.  Or long reliever/pinch hitter.  Whatever he is these days.  Fascinating player.

Speaking of the bullpen, it sure looked excellent this year.  Cordero, Rhodes, and the revelational Nick Masset combined for sub-3 ERA's and low-3 FIP's.  Jared Burton (FIP 3.75), Danny Herrera (seems like the screwball works, at least on lefties), and Carlos Fisher (scary walks) also performed adequately in middle relief.  If Bill Bray comes back strong following Tommy John, this could be a great young relief core moving forward.  Well, minus Rhodes, because he's old.

Overall, this wasn't a terrible pitching staff.  But it also wasn't a pitching staff that featured any fantastic individual performances.  And the rotation wasn't as strong as it has been in recent years, especially with injuries to Edinson Volquez and Harang.  Volquez apparently thinks he will be back mid-next season, which could be a nice shot in the arm if the team is able to do anything with the first half.  We'll see.

Wrap up and looking forward: So, that's your 2009 Reds.  Fun in April and September, utterly forgettable in between.  I don't know where this team is going, honestly.  There are some good parts here.  There are solid, steady contributers in Votto, Rolen, Phillips, Harang, and Arroyo.  And there is youth with some nice upside in Bruce, Bailey, Cueto, Stubbs, and Volquez (when he returns).  And there's more help on the way in Frazier, Alonso, and Leake.  But it's also a team that is seeing some key players, especially pitchers, start to show signs of aging.

Given this, I wonder if 2010 is the year with the best window for success?  And if so, can the cash-strapped Reds do what they need to do--plugging holes, mostly--to put themselves in a position to take advantage of some good fortune if it arrives?