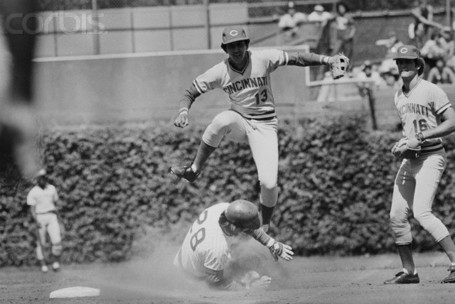 Through an unusual coincidence, Concepcion’s 1975 season almost perfectly captured his career averages: that year he hit .274 and produced a 679 OPS for an 88 OPS+. Over his 19 year career—all with the Reds—he hit .267, produced a 679 OPS for an 88 OPS+. Additionally, Concepcion’s 1975 season was marked by great defense at shortstop (winning his 2nd of 5 career Gold Gloves), and intelligent baserunning (33 steals to six times thrown out)—both were also trademarks of his career. His better seasons were marked with OPS+ marks 20-25 points higher than his average, again with the quality defense.

Throughout Concepcion’s career, you knew what he would not bring to the table: there wasn’t much power (just twice in his career reaching double digits in home runs), he didn’t take many walks (career high = 64), and while he had good speed he wasn’t prone to steal a ton of bases (twice topping 30 steals in a year). What he did do well: take advantage of the Riverfront turf (his career OPS at home was 37 points higher than on the road, and the vast majority of the difference could be found in his home/road splits for doubles), play exceptional defense, and show up to play just about every single day: in the 12-year stretch from 1974-1985, Concepcion averaged 148 games played per year…and that includes the 1981 season, in which the team lost 54 games due to the strike.

Looking back at Concepcion’s career, it is easy to see him as a bad hitter: indeed his bat barely made up half of his career value, but it is important to remember the context of the times. For example, in the aforementioned 1975 season, the average SS OPS+ was just 72. In Davey’s career year of 1974, where he posted a 106 OPS+, the average SS accounted for an 75 OPS+. Seven years later, in 1981, when Concepcion was putting up the highest OPS+ of his career (116), the average shortstop was still at an 75 level. By way of comparison, the average 2009 NL shortstop had an OPS+ of 90. In other words, relative to who the competition was throwing on the field, Concepcion made the Reds a better than average team by himself—and consistently did so for a long time—even before adding his more famous teammates into the mix. Also, from 1973-1982, Concepcion actually profiled as a league average hitter (101 OPS+). From 1983 through the end of his career in 1988, his hitting tailed off significantly as he made way for the next generation of shortstop greatness.