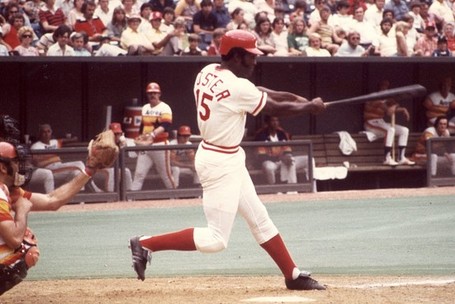 George Foster, who ended up with nearly 350 home runs for his career (a mark which would have been a virtual certainty were it not for the 1981 strike), had but 27 career round trippers as he hit age 26. In fact, through his age 26 season, Foster was statistically most similar to…Candy Maldonado (ignore the fact that Maldonado’s career had not yet begun, please). Three years later, Foster’s numbers were more in line with Pops Stargell. Part of this was due to opportunity—Foster had been blocked by some pretty impressive names in the early part of his career: Bobby Bonds, Bobby Tolan, Pete Rose—but through the 1974 season, Foster’s career slugging percentage was just .394. Then, in 1975, Foster was played with increasing regularity and SOMETHING HAPPENED, and he was one of the game’s most devastating power hitters. What seems unusual is that even a couple years back (1973), Foster spent most of the year in AAA-ball, and wasn’t hitting for significant power there either (15 HR, .409 slugging percentage). Now, placed in the starting lineup of an offensive juggernaut, his slugging percentage at the MLB level jumped to .518, then .530, then blew completely off the charts in 1977 (.631). A couple of interesting notes on Foster’s career: 1) 1977 was the only season he scored at least 100 runs (and he led the league that year). He had some other top-10 finishes in this category, so perhaps it’s more a function of run-scoring environment, but this surprised me for some reason; 2) For all the power, his career high in walks was just 75, and he placed in the NL top-10 in this stat just twice. He was, however, a prodigious free-swinger, and routinely topped 120 K’s in a year; 3) In 76 post-season at-bats, Foster had but 5 extra base hits; 4) In a strike-shortened 1981, Foster had what was arguably his 2nd best year: 22 HR, 90 RBI, and a 150 OPS+ in just 108 games. And after that year, he was traded to the Mets for Greg Harris, Jim Kern, and Alex Trevino, who (in order): went on to have a pretty interesting career as a reliever, but not until leaving Cincy; had one decent season with the Reds, but was otherwise done; and had an OK career as a backup catcher, but was downright terrible in his 2+ seasons with the Reds. And, still, the trade didn’t turn out that bad. Foster signed a mammoth contract with the Mets that ultimately made him the highest paid player by 1986, but during his New York tenure, the bottom fell out of his batting average, the power was mediocre, and the defense got pretty bad. In other words, the greatness shut off almost as quickly as it turned on, but it fortunately lined up nicely with a bunch of other great hitters. 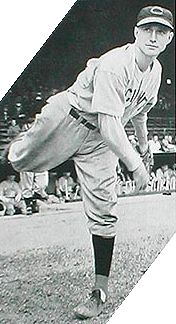 Walters made his MLB debut in 1931 as a third baseman for the Braves. It was a September audition, and it did not go well. The following year a similar call-up was equally bad—in two cups of coffee he hit less than .200, something that presumably did not endear him to management. He was traded to a minor league club, hit really well, was purchased by the Red Sox…and was a marginal hitter at best. Purchased by the Phillies during the 1934 season, Walters remained a below average 3rd baseman, but the team gave him a couple of opportunities to pitch, and he did well, allowing just one earned run in seven innings. Over the next 3+ seasons, Walters was transformed into a full-time pitcher, and he was mediocre, sporting a 38-53 record and a 98 ERA+ for the Phils. The Reds traded for Walters—now 29 years of age and completely unaccomplished—sending a 33 year old catcher, a below average pitcher, and $50K cash in exchange. True to form, Walters finished his season with the Reds with a 98 ERA+. How to explain, then, what happened next: a triple crown season (led the league in wins, strikeouts, and ERA) en route to an MVP award and a spot in the World Series. And finally finding his missing hitting stroke, he contributed a .325 batting average to the cause as well. He missed repeating the triple crown feat by 22 strikeouts the following season. This two-year, out-of-nowhere, peak showed a cumulative record of 49-21 and a 2.38 ERA (161 ERA+) over 624 innings. The overnight sensation saved what was perhaps his best performance for the 1940 World Series. Given the ball in games 2 and 6, Walters in both instances took the mound with his team down by a game in the Series. He threw a complete game three-hitter in game 2 and a complete game shutout in game 6—a game in which he helped his own cause with a solo home run. Thereafter, Walters was never quite the same pitcher (how could he be?), but was definitely above-average, and the war years of 1944-45 were certainly kind to his stats (he finished 5th in 1944’s MVP vote). Despite the late start to Walters’s pitching career, he finished with over 3100 innings and 198 victories (160 of which were with the Reds).