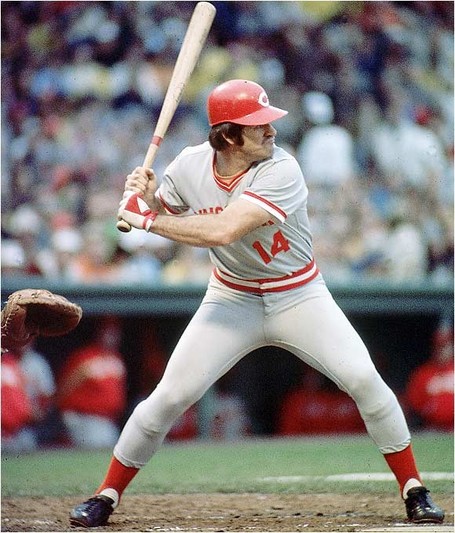 Peter Edward Rose, perhaps more than any man in the history of the world, was built to hit .300. One suspects that it was not only important to him (you just *know* he kept track of his stats), but that there was some sort of innate necessity—like an internal magnet that drew him towards a .300 batting average. I say this for a variety of reasons: one, Rose played for a really, really long time, came up to bat more than anyone ever, and hit .303 for that career. But at the end of his career, he had—as player/manager—the ability to write himself in or out of the lineup. As his skills dimmed (he hit just .219 in his final season), he had the power to ensure that his lifetime mark stayed above that magic line. More interesting, however, is just how balanced it all was after 14,000 at-bats. Rose hit .302 in day games, .303 at night. He hit .303 on grass, and the same on turf. Domed stadiums presented no trouble (.301). He wasn’t a total robot—for example he was a better left-handed hitter than right—but it must have seemed that way to opponents, at times. From 1965 through 1980, Rose managed at least 175 hits in each season—and often times posted many more than that. Too much has been written about Rose, much of it either overly positive or overly negative. Here, then, are five observations about Rose, rooted primarily in fact and data:

1) Rose was at least a little bit lucky that Tommy Helms wasn’t either a bit older or a bit better. Rose won Rookie of the Year in 1963, due in part to the fact that there weren’t many good candidates that year (he had just a 101 OPS+, and was caught stealing more times than he was successful). The following season, Rose was pretty bad—80 OPS+, didn’t field particularly well, etc. The Reds had Helms, another 2nd baseman, in AAA that year, and he was just not quite ready for prime time. Actually, as his career unveiled, it turned out he wasn’t quite good enough to be foundational to a winning team. Rose bounced back in ’65 (led the league in hits, finished 6th in MVP voting), but an impatient team or a better alternative at 2nd base might have changed his situation considerably.

2) Rose bounced from position to position, generally at four-year intervals, and didn’t play any of them particularly well. Honestly, one of the great surprises in this entire project was that Rose won two Gold Glove awards, while playing right field, but I would guess that a retrospective, fielding data-based examination of the results wouldn’t approve. Actually, he was probably a decent enough left fielder in the early 70’s, especially playing alongside Tolan or Geronimo. He didn’t make many errors, and was almost certainly pretty intelligent about throws, or running down flies, etc.

3) One of my favorite unknowable questions in baseball history is this: how many home runs could Pete Rose have hit had he employed a different style of hitting? He certainly didn’t hit very many as it was: just 160 of his 4256 hits went over the fence, and he peaked at 16, twice. From 1972 on, he reached double digit dingers just once. Still, he regularly led the league in doubles (five separate times during his 30’s), and he appeared to be muscular enough to turn some of those doubles into home runs. One imagines that his mental calculus determined that trying for home runs decrease the batting average, and that might mean he drop below .300…

4) Rose played until he was 45 years old. He clearly and transparently played long enough to eclipse Ty Cobb’s hits record. Still, he was good enough in 1985, at age 44, to post a .395 on-base percentage.

5) Throughout his career and its aftermath, Rose was probably a bit overrated. He was flashy, a great quote, a statistical freak given his longevity, and he had an elevated profile in part due to the greatness of his teammates. His peak was very good, but wasn’t other-worldly (he had only two seasons with OPS+ marks above 150, although he was generally on-base heavy). Still, it’s possible that his ridiculous career marks are understated. The indescribably good Baseball-reference.com takes efforts to translate each player’s season to a "neutral" offensive era, whereby teams average just over 4.4 runs per game. Since Rose’s peak took place in the pitcher-friendly 1960’s, he emerges favorably from this exercise, which imagines 4,604 career hits, 800 doubles, and an OPS of 815 instead of his actual 784.